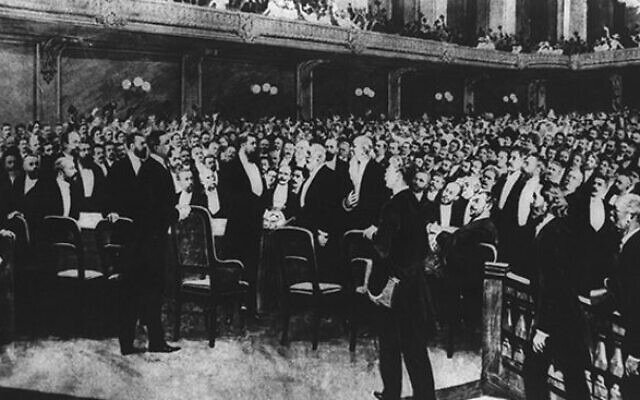 AUSTRALIAN Jewish leaders have harked back to August 29, 1897, a late summer’s day 125 years ago, when some 200 participants from 17 countries gathered in Basel, Switzerland for the First Zionist Congress. The three-day conference was convened principally to hear Jewish visionary Theodor Herzl, a Viennese journalist, lay out his plans for a Jewish state.

Herzl’s concept, which he expounded in his 1896 pamphlet Der Judenstaat (The Jewish State), sprung from the rampant antisemitism he witnessed in France while a correspondent of Viennese newspaper Neue Freie Presse, most notably the Dreyfus affair.

The congress venue, Basel’s casino, was symbolically fitting for Herzl’s far-sighted gambit. His famous words, “If you will it, it is no dream,” would appear in his later work, Altneuland (Old New Land) in 1902.

Over half the delegates in Basel were from Eastern Europe, nearly a quarter from Russia. Only 17 were women and at Basel they had no voting rights. The Zionist Congress subsequently met annually until 1901 and has been a fixture on the Jewish calendar ever since.

After the 1897 congress, Herzl reflected with foresight, “At Basel, I founded the Jewish state. If I said this out loud today, I would be greeted by universal laughter. In five years perhaps, and certainly in 50 years, everyone will perceive it.”

Zionist Federation of Australia (ZFA) president Jeremy Leibler stated, “When, 125 years ago, Theodor Herzl noted in his diary that he founded the Jewish state in Basel, he was being wildly prophetic. The ZFA was founded just 30 years after the First Zionist Congress – and 21 years before Israel itself … As a community, we are incredibly proud of the role that Australians, both Jewish and non-Jewish, played and continue to play in creating, shaping and strengthening Israel.”

Reflecting that Herzl “willed the Basel conference into being through his vision, energy and determination”, Executive Council of Australian Jewry co-CEO Alex Ryvchin noted, “Zionism was and remains a radical idea. It took a beleaguered, scattered people and restored them to independence in their homeland nearly two millennia after their exile … But whatever the prevailing trends of the day, Zionism is permanent because it is just and steeped in principles of Jewish peoplehood and connection to land.”

Australia/Israel & Jewish Affairs Council executive director Colin Rubenstein observed, “Israel, as the fulfilment of the Zionist dream, has exceeded even Theodor Herzl’s dreams at the First Zionist Congress in Basel. Herzl effectively foresaw Israel as a start-up nation, generations before the concept existed. He didn’t envision a Jewish utopia, but a country full of the nuances and complexities integral to every mature nation, and in many ways he was prophetic.”

Rubenstein expressed hope for a time when “all the children of Abraham can live in peace and prosperity, and Herzl’s dream will be largely realised”.