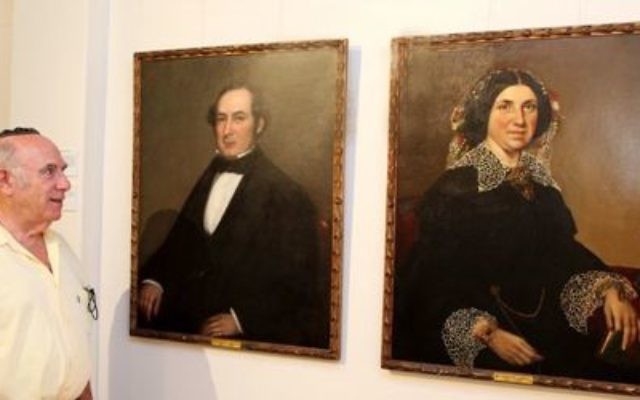 SYDNEY grandfather Joe Kensell is eagerly anticipating January 30 – it will be the 180th anniversary of Australia’s first officially sanctioned Jewish marriage – and the happy couple, Moses Joseph and Rosetta Nathan, were his great, great grandparents.

Kensell, 73, of Five Dock, a stalwart of the Great Synagogue and a genealogy buff, told The AJN this week the date was historically significant as “it shows there’s definitely been 180 years of Jewish worship in Australia”.

Kensell spends two days a week digitising the synagogue’s early records, including births, marriages and deaths. He was lightheartedly advised by the shul’s Rabbi Jeremy Lawrence that “based on the tradition of donating a tree for every year of marriage, I should be donating a forest in Israel”.

In a serious vein, Kensell said he was hoping to draw attention to the fact that “some convicts did good, and their families lived on”.

When Kensell’s daughter was married in the Great Synagogue six years ago, it was a proud milestone, he said, because it symbolised a continuity from 1832 to the present day, and “continuing to be Jewish in the same congregation [Moses and Rosetta] were in”.

Before this wedding, several Jews had tied the knot, but these marriages had been consecrated by non-Jewish clergy, such as the Reverend Samuel Marsden, an iconic churchman of the early colonial era.

The Joseph-Nathan wedding was conducted by Phillip Joseph Cohen, who arrived in Australia with the permission of the British chief rabbi to carry out Jewish marriages.

Transported from England after he was convicted of handling counterfeit currency, Moses Joseph was eventually emancipated and led a fulfilled life. He and Rosetta became prosperous through his business and had nine children. He became founding president of the York Street Synagogue, the first purpose-built shul in Australia.

A descendant of Miriam Nathan, a niece of Rosetta’s, is Rabbi Dr John Levi of Melbourne, emeritus rabbi of the Union for Progressive Judaism. Kensell and Rabbi Levi discovered their intertwined yichus (family line) a few years ago when These are the Names, the rabbi’s history of early Jewish Australia, was launched in Sydney.

Rabbi Levi told The AJN the marriage of Moses and Rosetta “was a very romantic story because Rosetta travelled out to Australia to marry Moses”. “They’d fallen in love as first cousins and she packed up with the blessings of her family and sailed for Sydney. She deserves to be saluted as one of the great Jewish women of Australia.”

Rosetta’s siblings followed her out, and her youngest brother David went on to New Zealand and his marriage was the first chuppah there. The company he founded, L D Nathan & Co Ltd, became acclaimed brewer Lion Nathan in Australia.

“Almost every Jewish community in eastern Australia and New Zealand came into being because of Moses and Rosetta,” Rabbi Levi said.

Joe Kensell with portraits of Moses Joseph and his bride Rosetta Nathan.