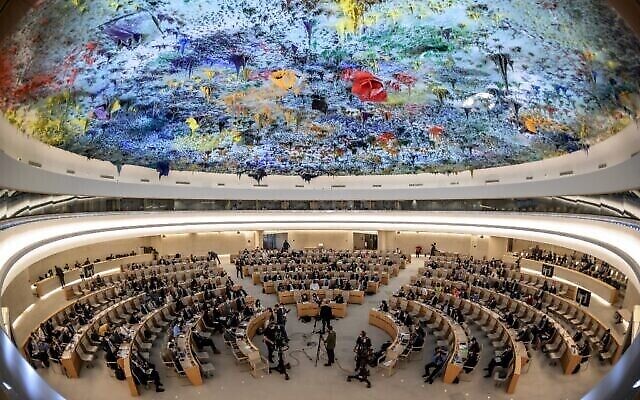 A general view of the Room XX. Photo by Fabrice COFFRINI / AFP

The United States and 21 other countries issued a harsh rebuke on Monday to the United Nations Human Rights Council (UNHRC) after a Commission of Inquiry formed to probe Israel released a report last week condemning the Jewish state.

The report – the first submitted to the Commission of Inquiry (COI) established last year by the Human Rights Council – blamed Israel’s “persistent discrimination against Palestinians” for violence between the two sides.

“We believe the nature of the COI established last May is further demonstration of long-standing, disproportionate attention given to Israel in the council and must stop,” US ambassador Michèle Taylor read out at the 50th session of the UNHRC in Geneva, where the report was being debated.

“We continue to believe that this long-standing disproportionate scrutiny should end, and that the council should address all human rights concerns, regardless of country, in an even-handed manner,” she said.

“Regrettably, we are concerned that the Commission of Inquiry will further contribute to the polarisation of a situation about which so many of us are concerned,” Taylor said.

Foreign Minister Yair Lapid thanked his US counterpart Antony Blinken and all the countries that signed on.

“Today is a day of change at the Human Rights Council,” Lapid said. “A day on which morality is overcoming hypocrisy.”

In an 18-page report released last week focused on root causes of the conflict, the COI blamed Israeli “discrimination against Palestinians” for violence between the two sides. The commission took two trips to research the report, one to Geneva and the other to Jordan.

Israel has refused to cooperate with the commission and has not granted it entry into Israel or access to Palestinian-controlled areas in the West Bank and Gaza.

The Biden administration brought the US back into the UNHRC last year after former president Donald Trump withdrew its membership in 2018. While the US has acknowledged the council’s previous bias against Israel, Washington argues it is better to have a seat at the table where it can influence decisions.