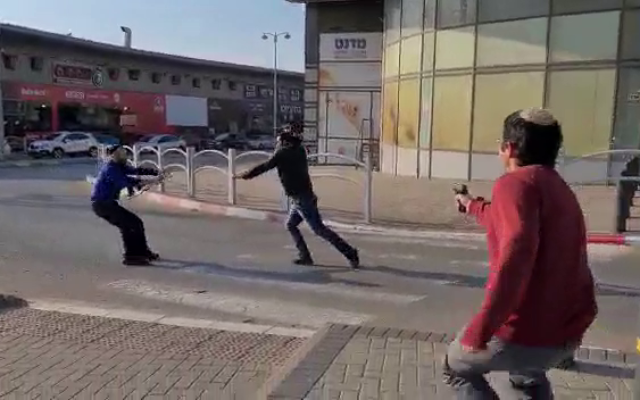 A suspected assailant being shot in Beersheba on March 22, 2022. Photo: Twitter Screenshot

FOUR Israelis were killed and several others wounded Tuesday in a ramming and stabbing attack at an outdoor shopping mall in Beersheba in Israel’s deadliest terror attack in years, officials said.

According to police, the assailant first stabbed a woman to death at a gas station in the southern city. He then entered his car and rammed a cyclist, before getting out again and stabbing several people at the shopping centre.

The terrorist was confronted by an armed bus driver, who attempted to get him to lower his weapon, footage from the scene showed. The attacker lunged at the driver, who shot him several times alongside a second armed Israeli civilian. Israeli first responders reported that the stabber died from his gunshot wounds.

Police commissioner Kobi Shabtai said the entire incident lasted eight minutes, with police officers arriving at the scene four minutes after being alerted. “Citizens displayed resourcefulness and killed the terrorist in the initial minutes,” he said.

Magen David Adom medics reported that a 40-year-old Israeli woman died on the scene after being stabbed. Five other victims of the attack were rushed to Soroka Medical Centerm, where the cyclist and two of the stabbing victims died of their wounds.

A graphic video shared online showed the gas station attack on the first female victim. It is provided below with the victim blurred out

Palestinian media identified the stabber as 34-year-old Mohammad Ghaleb Abu al-Qi’an, a terror convict from the Bedouin town of Hura in the Negev. Abu al-Qi’an, who died of his wounds on the scene, had served four years in prison for plotting to join the fundamentalist Islamic State terror group in Syria. He was released in 2019. Shabtai said he likely acted alone in Tuesday’s attack.

The remaining two victims of the attack remained in serious but stable condition at the hospital.

The Hamas terror group praised the stabbing attack, saying it “salutes the executor of the heroic operation in occupied Beersheba.” The terror group did not claim the stabber as a member, however. 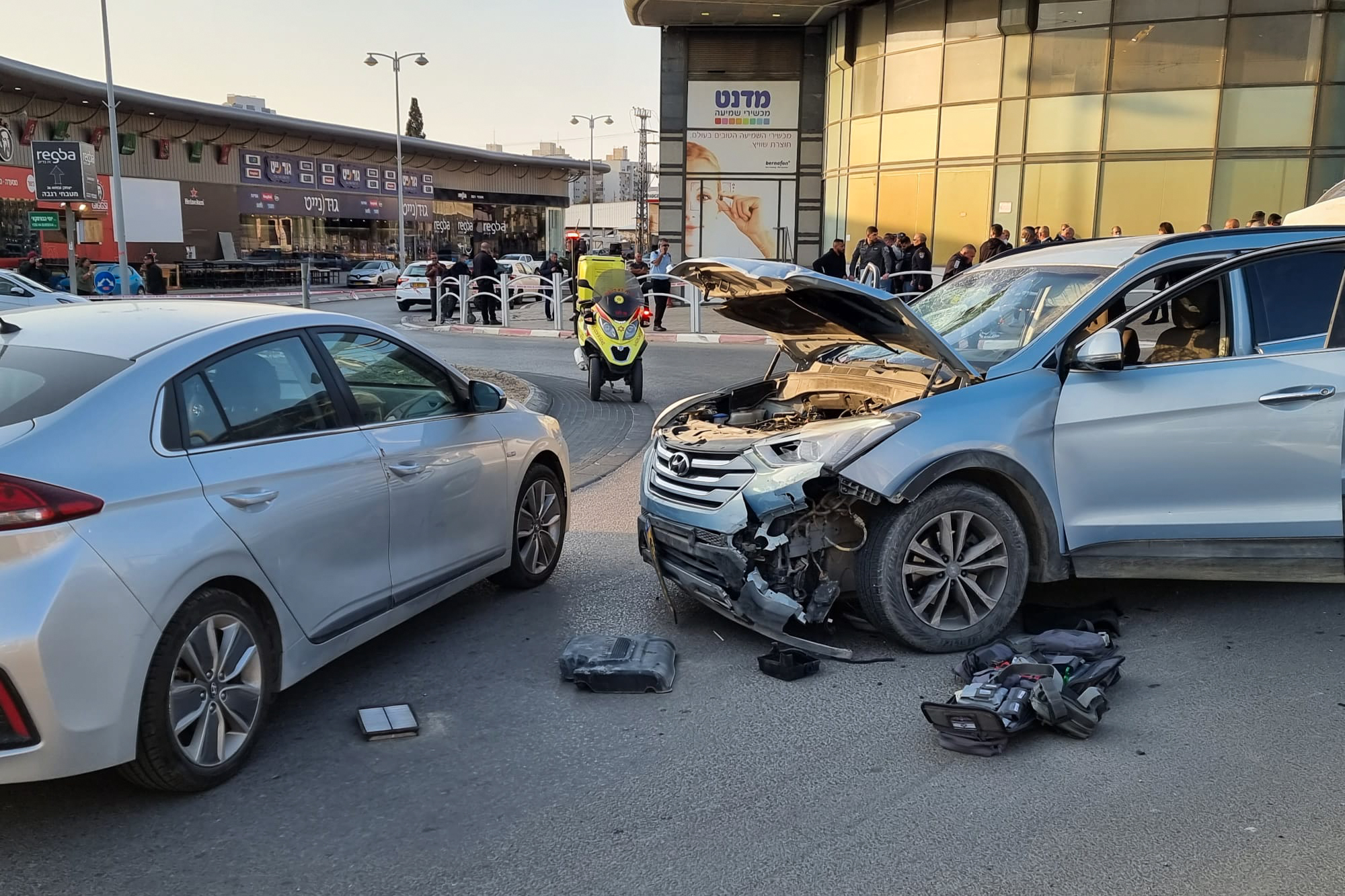 The scene of a car ramming and stabbing attack outside the big shopping center in Beer Sheva, southern Israel, on March 22. Photo: by Flash90

The bus driver who confronted and shot the terrorist later recounted trying to talk the stabber down before shooting him.

Arthur Chaimov told Channel 12 he’d arrived at a traffic circle near the shopping centre, and first thought there had been a car accident. But when he saw a man running around seemingly brandishing a knife, he got out of the bus with his personal weapon.

“I got closer and then I saw he had a knife. I saw a man [lying] wounded. I told [the stabber] several times: ‘I’m asking you to put down the knife. I won’t shoot you. He said ‘No.’”

Al-Qi’an lunged at him several times, with Chaimov moving back each time, as seen in a video of the incident. Eventually, the assailant got too close and Chaimov, sensing danger, fired his weapon.

Chaimov stressed he’d done all he could to avoid shooting the terrorist and was pained to have done so, despite al-Qi’an’s murderous actions.

“He’s a person, not an animal you need to kill. He was also a person… We’re human beings, we’re not animals,” Chaimov said. “I’m not used to such a situation, to shoot a person. I’m sorry for him but he brought it on himself.”

Speaking from the scene of the stabbing, Shabtai said cops were being put on high alert out of fear of copycat attacks. The police chief also said police and Shin Bet investigators were checking whether the attacker had help, but think he acted alone.

“This terrorist carried out a murderous heinous rampage, ramming people and stabbing them. We haven’t confronted something on this scale in some time,” Shabtai said. “We have bolstered national preparedness out of concern for copycat attacks.”

Video showed a number of people yelling “shame” as Shabtai spoke, apparently in protest of the police response.

The attack comes amid a string of attacks in Jerusalem and the West Bank. 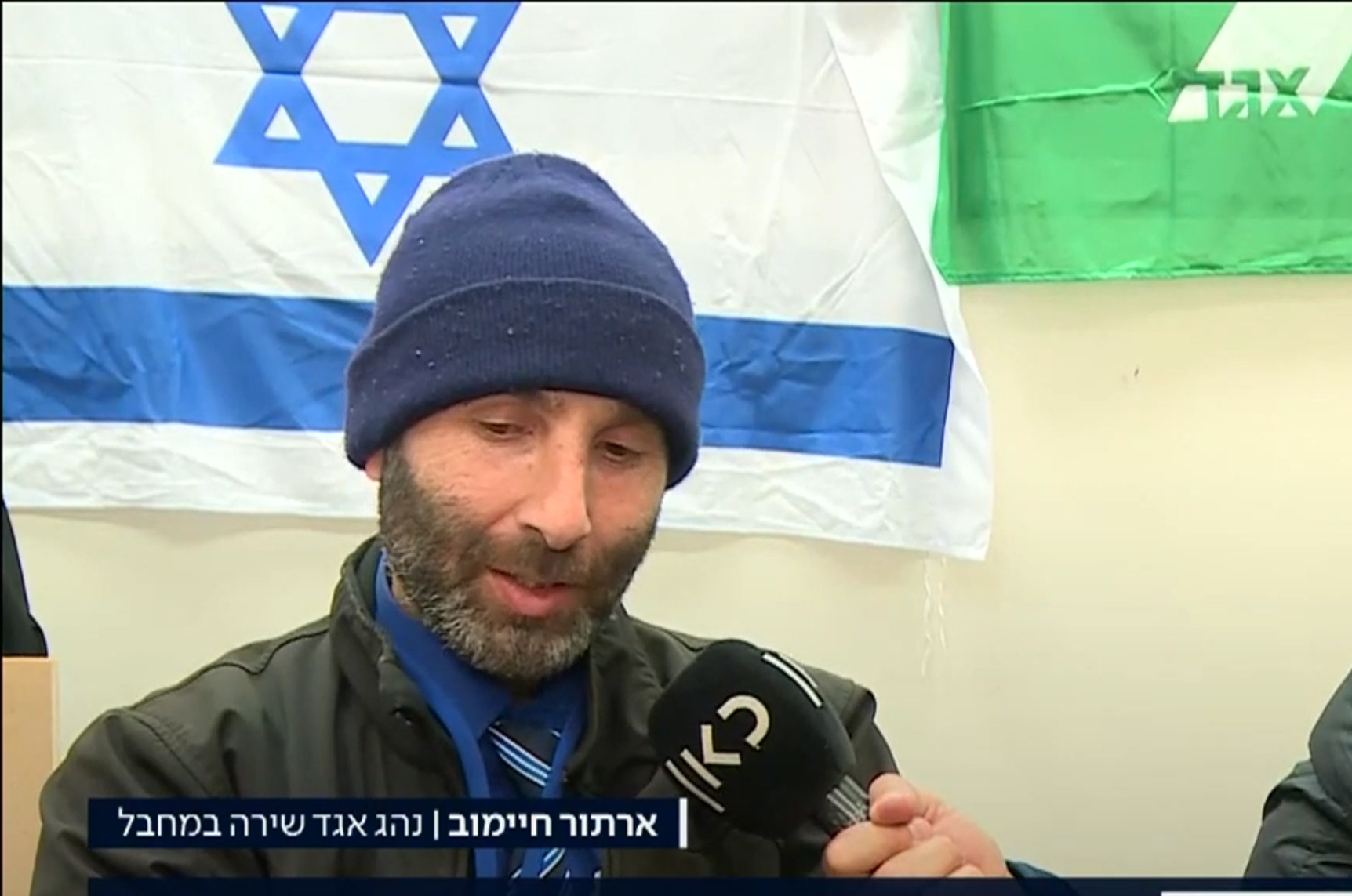 Arthur Chaimov, a bus driver who shot a terrorist after a deadly stabbing attack in Beersheba, speaks to the Kan public broadcaster, March 22. Photo: screenshot

On Sunday, two officers were hurt in a suspected stabbing attack in East Jerusalem’s Ras al-Amud neighborhood, and on Saturday, an Israeli man was stabbed and lightly hurt when he was out jogging on Jerusalem’s Hebron Road.

Earlier this month there were several attacks in Jerusalem’s Old City, and in a nearby West Bank town.

Defence Minister Benny Gantz offered his condolences to the victims’ families. “The IDF and security forces will use all means to prevent terrorist incidents, as much as possible. We are on high alert against all threats in all areas,” Gantz said.

“We will make sure that anyone who encourages or supports the latest attacks, will pay a price,” Gantz added during a tour of the military’s northern command.

Arab Israeli parties condemned the attack. Both the Islamist Ra’am party – which is a member of the coalition government — and the opposition Joint List party used the word “pigua,” which is widely used in Hebrew to describe any nationalistic attack, but which strongly implies terrorism.

“Ra’am condemns this despicable attack in Beersheba and sends its condolences to the families of those murdered,” Ra’am said in statement.

“Ra’am calls on all citizens to preserve the common, fragile social fabric, to be responsible and advance a discourse of tolerance in this difficult hour,” Ra’am added.

Joint List chief Ayman Odeh said he was shocked by the stabbing attack, which he deemed a “murderous incident.”

“Violence is not our way and we must condemn it with all our might,” Odeh wrote on Twitter.