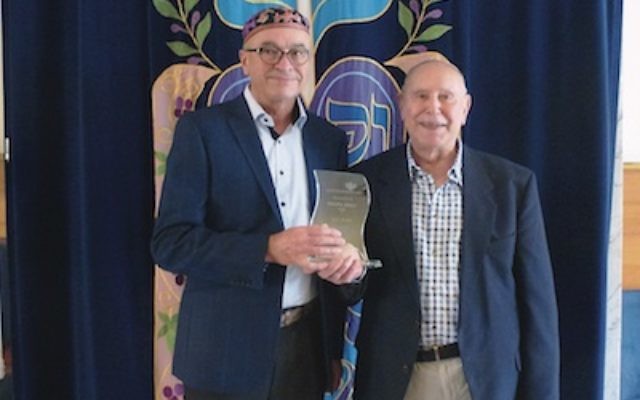 Veteran Adelaide communal ­figure Edwin Argy has been recognised by the Progressive community for his decades of service to Beit Shalom, South Australia’s Progressive congregation.

Argy, 82, who has retired after serving for 45 years on Beit Shalom’s board – an innings he believes to be an Australian record – has been presented with a Vatik Award by the Union for Progressive Judaism (UPJ) for his outstanding service to the Adelaide Jewish community.

Former shul presidents who have remained active at the shul for five years after their presidency are eligible for a Vatik.

Born in Alexandria, Egypt, to a French mother and British father, Argy attended a French school and was active in Maccabi, but the family became victims of Egyptian president Gamal Abdel Nasser’s widespread persecution of Jews in the build-up to the 1956 Suez War between Egypt and the combined forces of Israel, Britain and France.

While his father, mother and sister were placed under house arrest, Argy, then 21, and his brother were taken to a prison in Cairo and, as British nationals, were later deported in handcuffs by ship to Britain. The Anglo-Egyptian Resettlement Board offered Argy the choice between a down payment on a house in England or payment of a voyage to Australia to resettle there, and he chose Australia.

Neighbours from Alexandria had made new lives in Adelaide, so he joined them there in 1958.

Years later, when the Adelaide Hebrew Congregation declined to perform a brit milah for his son because Argy’s wife, the child’s mother, was not Jewish, he became dissatisfied and, together with like-minded Jews, formed Beit Shalom as a Progressive synagogue in 1963.

Argy became a successful property developer. Over the decades, he has served in numerous board roles at Beit Shalom, including treasurer and president.

He is upbeat about the future of Adelaide’s Jewish community, and particularly Beit Shalom, which is “doing well and is on a secure foundation”.

UPJ president Roger Mendelson, in conferring the Vatik Award on Argy, described his qualities of “vision”, “hard work” and “persistence”.

“For Ed, this has been a long wait but it is now my huge pleasure, on behalf of the UPJ and in the presence of your beloved congregation to present this award to you.”