Labor MPs Josh Burns and Martin Foley visited the Middle Park Kindergarten in Albert Park this morning, after the words ...

Posted by The Australian Jewish News on Monday, June 22, 2020

ACTING Multicultural Affairs Minister Alan Tudge has condemned the daubing of a kindergarten in Melbourne’s Albert Park with the words “4th Reich” and a Star of David as “a despicable act of a coward”.

The incident at the Middle Park Kindergarten was reported to the Anti-Defamation Commission (ADC) on Saturday by a shocked non-Jewish man who was walking in the area. The graffiti has since been removed and reported to police. 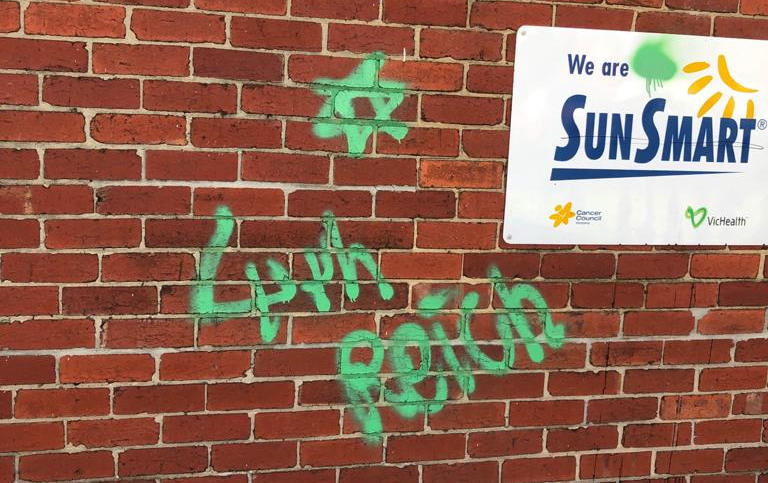 The vandalism at Middle Park Kindergarten in Albert Park.

Tudge said on Monday, “Hard to believe that 75 years since the Holocaust, this sort of antisemitism still exists. And at a kindergarten!”

“There’s no place for this disgusting hate in Australia,” Giles and Burns said in a statement on Monday.

“Labor stands in solidarity with the local community and all Jewish Australians.”

ADC chairman Dvir Abramovich said to defile a place where children play and learn with neo-Nazi vandalism is “beyond words and beyond contempt”.

The racist graffiti on a Middle Park Kindergarten, a place where kids and families gather, is a disgraceful attack on the shared inclusive values of our community. Antisemitism has no place in our neighbourhood. #springst #auspol https://t.co/o4Ehuxk4qH

“This senseless defacement is a vile attack on the core values and spirit of the kindergarten, a place where students, family and staff of all ethnic and religious backgrounds are welcomed,” Abramovich told The AJN on Sunday.

Describing the graffiti as “despicable”, Abramovich said, “Let’s remember that 1.5 million children were murdered in the Holocaust by the Nazis, and this graffiti is a death threat which should be taken seriously.”

This is a despicable act. There is no place for anti-semitic behaviour in our community. Hurtful and cruel.

Stating, “I hope that those cowards who committed this sickening outrage are identified and prosecuted to the full extent of the law,” he added, “Melbourne is a city of strength and pluralism, and united we will fight back against this filth which is invading our neighbourhood.”

The incident comes less than a fortnight after a swastika was scrawled over a Star of David on an ATM in the Melbourne suburb of Balaclava.