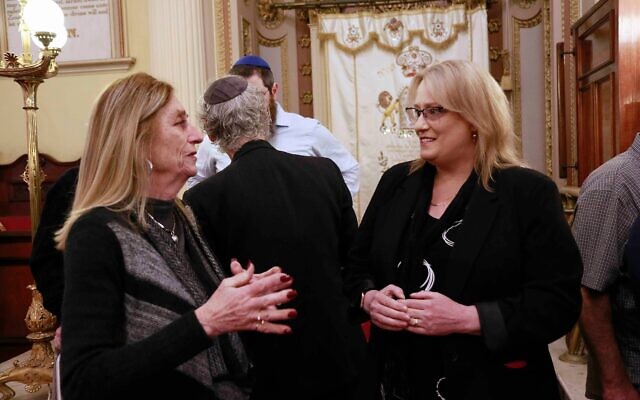 EAST Melbourne Hebrew Congregation (EMHC) has scored a $500,000 grant from the Victorian government, the largest multicultural grant served up in the latest round of community project funding.

Minister for Multicultural Affairs Ros Spence visited the shule last Tuesday to announce the funding, which will be put towards the planned $5 million redevelopment of the heritage building.

The synagogue in Albert Street – the oldest in Melbourne – was built in record time in 1877, the process taking only six months. After almost 145 years, the old schoolroom at the rear of the shule will be transformed into a Judaic library and learning centre which will be used as “a vibrant cultural hub for performance and screenings” and “a home for writers and thinkers,” according to a statement from the shule.

Plans are also underway for a modern new building, consisting of a community hall and kitchen, a recreation space for youth, a boutique mikvah, a rooftop terrace and a residence for the rabbi and his family with an adjoining guest suite. So far, the shule has raised around $3 million for the redevelopment.

Welcoming the grant and thanking the minister, EMHC’s Rabbi Dovid Gutnick said the shule’s “story is the story of the origins of Melbourne Jewry, the synagogue of Sir Isaac Isaacs and Sir John Monash, and the place where thousands have come to pray, to connect, to celebrate life cycle events or to receive pastoral care. We are the Jewish community’s open door to the world – a place where everyone is welcome.”

Talking to The AJN, Spence said, “There is so much history here,” adding, “This is a really special project that clearly benefits the entire community.”

In total, $5.75 million from the government will be shared between 40 projects to help Victoria’s ethnic communities remain connected to their culture. Other beneficiaries include the Ballarat Welcome Centre, the St George Jacobite Syrian Orthodox Church in Heatherton and the Victorian Muslim Women’s Wellbeing Centre in Braybrook.

Meanwhile, condemning the spate of antisemitism the community has experienced recently, Spence told The AJN, “What’s important now is seeing whether they stay up or whether they taper off, but we can’t just wait and watch,” she added.

“We’ve recently had a round for anti-racism grants … and we’re in the process of setting up an anti-racism taskforce.”

The Andrews government introduced plans for a Local Anti-Racism Initiatives Grants Program 2021 in late March, which hopes to strengthen local communities’ abilities to “report racism incidents, promote awareness and understanding of their rights, support those affected by racism and promote community harmony”.