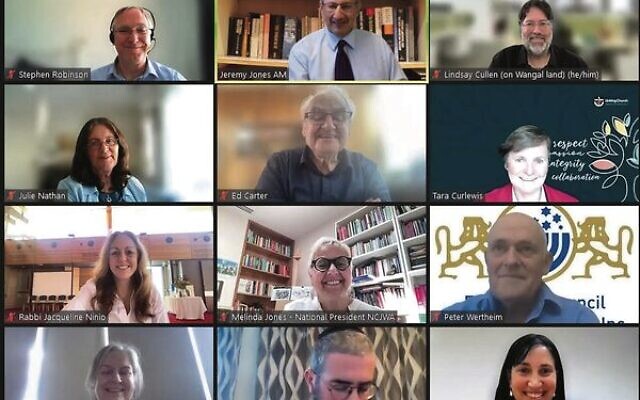 The National Dialogue between the Uniting Church in Australia and the Executive Council of Australian Jewry (ECAJ) took place last week, discussing religious and interfaith responses to trauma suffered by communities.

The dialogue focused on a variety of issues, including “best practice” in response to trauma, how faith informs responses by adherents of different religious traditions, and the impact of interfaith work in this area.

Jeremy Jones, co-chair of the dialogue along with Rev Tara Curlewis, said, “It is the 54th time the delegations of Christian and Jewish representatives have met, but there has been no waning in interest or enthusiasm over more than three decades.”

The lead presentations from the Jewish community were made by Rabbanit Judith Levitan and Rabbi Yaakov Glasman. Other Jewish representatives at the dialogue were Rabbi Jacqueline Ninio, Melinda Jones, Julie Nathan and Peter Wertheim.

The Uniting Church presentations included a thought-provoking reflection inspired by Psalm 23 given by Alison Bleyerveen, and a report by Rev Dr Stephen Robinson on his encounters with members of religious communities who had been impacted by violence, including the Tree of Life Or l’Simcha community in Pittsburgh.

The dialogue also discussed some of the issues covered at the recent World Council of Churches Assembly in Germany, including contemporary interfaith relations and discussions on Israel.

“We appreciated in particular the opportunity to briefly discuss the importance of solidarity against antisemitism, in the context of genuine friendship manifest at the dialogue,” Jones said.

“While convening online doesn’t have the same energy as generated at our face-to-face meetings, it has allowed us to maintain momentum and continuity in the longest-running formal national interfaith dialogue in Australia.”