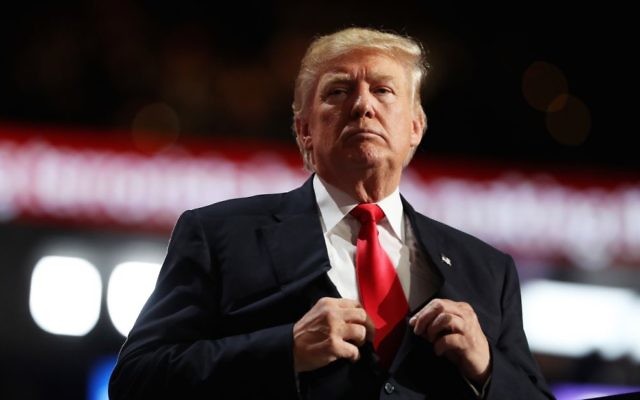 DONALD Trump’s historic election as the 45th US president has been met with mixed reactions from leaders of the Australian Jewish community.

Reacting to the businessman’s victory over Hillary Clinton, Executive Council of Australian Jewry president Robert Goot told The AJN it is “difficult to know” how a Trump presidency will address the issues that impact most greatly on Israel and world Jewry, including the Arab-Israeli conflict, Islamist terrorism and contemporary anti-Semitism.

“At times, he has outlined very specific policies including a desire to comprehensively destroy ISIS, engage with the parties to the Arab-Israeli conflict to finally arrive at a two-state solution and to immediately move the US Embassy in Israel to Israel’s capital, Jerusalem,” Goot said.

“On other occasions, he has been elusive, opaque and inconsistent in his policy pronouncements making it very difficult to predict US policy under a Trump presidency.”

Goot noted that Trump has yet to name a secretary of state, a secretary of defence or an ambassador to the UN, “these positions being critical to Middle East policy”, and that concerns have been expressed about Trump’s appointment of his chief strategist Steve Bannon. “On the other hand, it is reassuring to hear that in his discussions with President [Barack] Obama, president-elect Trump has apparently moderated his views on NATO.”

Australia/Israel & Jewish Affairs Council (AIJAC) executive director Colin Rubenstein said, “We hope the Trump administration will prove to be a positive force internationally; welcome his plans to strengthen efforts to hold Iran to account under the flawed Joint Comprehensive Plan of Action; commend his enthusiasm for closer US-Israel ties, hopefully paving the way for -direct negotiations between Israel and the Palestinians without preconditions; and also hope he will pursue policies that will help resolve the horrific bloodshed in Syria; and that he will succeed in restoring confidence in the United States’ leadership throughout the Middle East – as well as in the Asia-Pacific region.”

He added, “We note president-elect Trump’s more inclusive and conciliatory tone after winning what has been a very divisive election, and hope that approach will continue and that the United States will remain a beacon of the free, democratic world.”

Endorsing Israeli Prime Minister Benjamin Netanyahu’s statements that Trump is “a great friend of Israel”, Zionist Federation of Australia president Danny Lamm expressed hope that Israel’s strongest and most loyal ally “would continue if not enhance its support of Israel”.