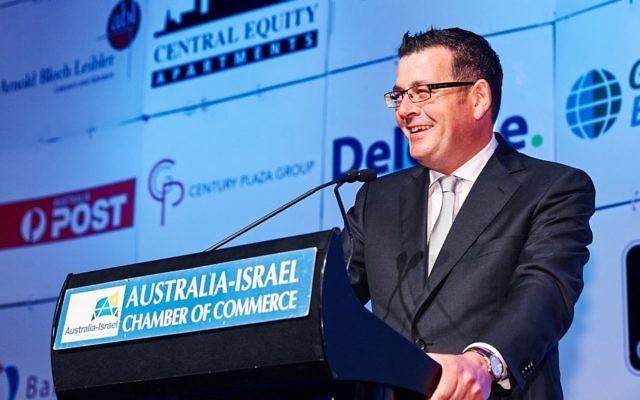 WHEN Matthew Guy announced on the cover of The AJN two weeks ago that if he won the next state election the Liberal Nationals government would open a Victorian trade office in Jerusalem, there’s no question it was something of a coup.

For several months, the Andrews government had been working on opening a trade office in Tel Aviv and its official opening was to be the highlight of the Premier’s visit to Israel last week.

That Guy pipped him to the post grabbing the headline a week earlier was a perfect example of political gazumping.

Nonetheless, it’s one thing to promise it and another thing to have actually done it, so there can be nothing but praise for Andrews and the Victorian Labor Party.

The office is now open, strengthening and developing trade ties between the Jewish State and the Garden State.

However, determined not to be overshadowed, the Opposition fired a broadside, accusing the Premier of disrespecting and insulting the Jewish community by opting for Tel Aviv over Jerusalem as the office’s location.

On the contrary, the Jewish community is thrilled that the Victorian government has opened a trade office in Israel irrespective of its location.

The fact that it is in Tel Aviv reflects the city’s status as an economic hub, no more, no less.

Would the Opposition be equally condemnatory if a foreign nation opened a trade office in Melbourne rather than Canberra, accusing them of disrespecting and insulting Australians? Of course not. They’d welcome the opportunity to expand trade ties between Victoria and that nation.

It was an ill-judged move on the part of the Liberals. They won the first round pre-empting the government’s opening of the trade office with their announcement, and they also scored brownie points by saying their trade office would be in Jerusalem.

And there they should have left it, rather than seeking to distort and misrepresent the reaction of the Jewish community to the Andrews move, which has been overwhelmingly positive.

Our local politicians, in particular our Jewish MPs, should have more sense than to try to turn the issue into a domestic political football.

Ultimately, both parties are to be applauded for recognising the value in a strong economic relationship with Israel, and we welcome their efforts to do so.