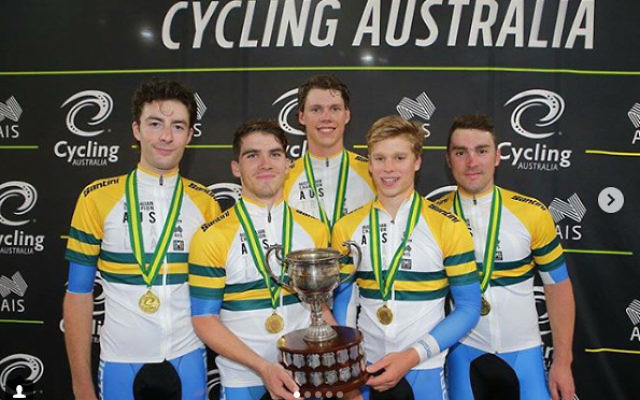 Victoria’s time of 3 minutes and 58.829 seconds nudged out SA by two-tenths of a second and secured Hart and his team a place in a select group of athletes who have ridden a sub-four-minute team pursuit.

“It was not a title that I expected to win, so that made it even sweeter,” Hart told The AJN.

“[It was] one of the only races I have ever done where I was still nervous after it had commenced. I didn’t want to mess up with two world champions on my wheel.”

Hart endured a challenging back end of 2017 where he struggled with a nagging knee issue and juggled his VCE study and exams.

A successful yet vigorous training routine leading up to the National Championships saw Hart selected to ride in the final of the team pursuit, but under strict guidelines.

To ensure Hart’s knew wouldn’t be overworked, the team decided to leave him out of qualifying and then have him ride in the final if they reached it, which in hindsight was a gamble worth taking.

The original plan was for Hart’s second turn leading the team in the final to be for only one lap, but before the start of the race, the experienced Howard suggested Hart ride an extra half-lap if he felt up to it – and what a master-stroke it proved to be.

When Hart took control of the speed for his team with six laps to go, the Victorian team trailed SA by 0.8 of a second, but by the time he had completed his lap and a half in front, they were even with four laps to go.

Hart’s brave ride set his team up for a gripping finish.

At the bell lap the Victorians edged to the front and then rocketed home by 0.28 of a second to clinch a memorable and drought-breaking gold medal.

The team’s time, with an average speed over 60km/h, was 0.2 of a second off Australia’s Athens Olympics time, and would have resulted in bronze at the 2008 Olympics in Beijing.

Hart took to social media following the event to express his delight at claiming gold with the Victorian team.

“Still absolutely buzzing after taking out the TP at #tracknats last night. Was an honour to be part of an incredibly talented group and team VIC as a whole. I can now say I have joined the sub-4 minute club!”

“A very short track season ended in the sweetest possible way. Only a few weeks ago I was unsure whether I would even compete at nationals and now I am reflecting on an event that heralded my first elite national title.”

Hart has put his knee issues behind him, which bodes well for a strong 2018.

But first he will take a well-earned break from cycling and head to Africa where he aims to conquer more heights, this time Mount Kilimanjaro, before he turns his attention to the European circuit.