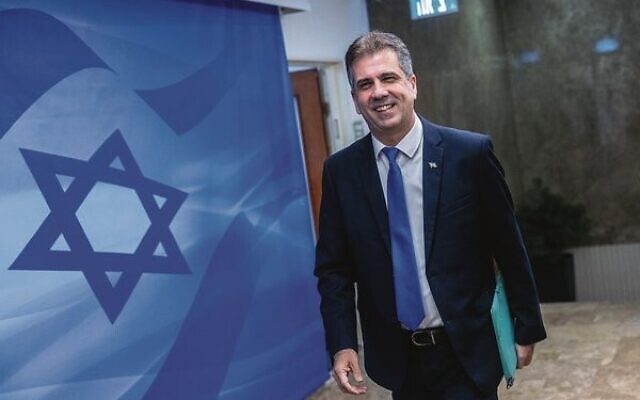 Israeli Foreign Minister Eli Cohen on Tuesday rejected a call to end punitive measures Israel has applied against the Palestinian Authority over Ramallah’s push for an investigation of the Jewish state at the International Court of Justice (ICJ).

Instead, Cohen urged the international community to act against Palestinian incitement, which he said encourages terrorism.

“Meaningless statements and signatures will not stop us from making the right decisions that will protect our citizens and secure our future,” Cohen said in a statement from Davos, Switzerland, where he is attending the World Economic Forum annual meeting.

Late last month, the UN General Assembly approved a resolution promoted by the Palestinians requesting that the ICJ weigh in on the Israeli-Palestinian conflict, Israeli “annexation” and the “legal status of the occupation”.

After the resolution passed, Israel levelled a bevy of sanctions on the Palestinian Authority and individual Palestinian officials.

A letter released on Monday by 90 countries called on Israel to immediately roll back the punitive steps. It was signed by representatives of Arab nations and the 57-member Organisation of Islamic Cooperation along with 37 other countries – 27 of them from Europe, including Germany, France and Italy, as well as Japan, South Korea, Brazil, Mexico and South Africa.

“The interest of all the countries of the world should be to stop the incitement of the Palestinian Authority, which encourages terrorism and pays terrorists who kill Jews,” Cohen said. “The State of Israel is committed first and foremost to Israel’s security.”

The 193-member UN General Assembly had voted 87-26 with 53 abstentions on December 30 to pass the ICJ resolution calling for a probe of Israel. The Palestinians applauded the resolution as a “diplomatic victory”.

Among the retaliatory measures approved by the Israeli government were seizing NIS 139 million (A$58.4 million) in tax revenues Israel collects on behalf of the PA and channelling them to Israeli victims of Palestinian terrorism; deducting from the revenues to offset stipend payments the PA makes to Palestinian terrorists, attackers, security prisoners and their families; freezing Palestinian construction in much of the West Bank; and cancelling some Palestinian VIP benefits.

The move highlighted the tough line the new government is taking toward the Palestinians, at a time of spiking violence in the West Bank and with peace talks a distant memory.

At a press conference last week after signing the decree to block the tax revenue, Finance Minister Bezalel Smotrich was asked whether he was concerned the move could bring about the collapse of the PA. “As long as the Palestinian Authority encourages terror and is an enemy, I have no interest for it to continue to exist,” he answered.

He said as long as the PA “operates according to agreements, takes care of civilian life and thwarts terror activities in cooperation with Israel’s security establishment, then, of course, it is possible to have relations with the authority.”

The ICJ, also known as the World Court, is the top UN court for mediating disputes between countries. Its rulings carry legal weight and influence public opinion but it has no mechanism for enforcement. The court is separate from the International Criminal Court, which is also in The Hague.

The court last issued an advisory opinion on the Israeli-Palestinian conflict in 2004 when the General Assembly asked it to rule on the legality of the security barrier Israel built along much of the West Bank.

Also on Tuesday, Cohen met with his Swiss counterpart, Ignazio Cassis, telling him, “We expect fair conduct by the UN Security Council toward Israel during Switzerland’s term in the Council,” the Israeli Foreign Ministry said in a Hebrew readout of the comments.

Last June the UN voted to make Switzerland a non-permanent member of the top-level Security Council.

Cohen stressed to Cassis the “great importance of balanced and fair conduct by the Security Council, especially in the context of what is happening in the Middle East” and said Israel “will appreciate Switzerland’s constructive conduct during its tenure on the Council”.