PRIME Minister Scott Morrison has led a chorus of tributes to Shoah survivor and self-proclaimed “Happiest Man on Earth” Eddie Jaku, who passed away early on Tuesday at the age of 101.

Born Abraham Jakubowicz in Leipzig, Germany, Jaku lived through Kristallnacht and survived Auschwitz – where his parents were murdered – and a number of other camps before starting a new life in Sydney with his wife Flore and becoming one of the founders of the Sydney Jewish Museum (SJM).

He shared his story with hundreds of thousands of people, telling The AJN last year, “It will happen again if we are not vigilant. If we don’t learn from our past we will not have a future.”

Having experienced the darkest of times, Jaku chose to be an optimist, inspiring others with a message of love and positivity. He received a standing ovation from over 6000 people at a TEDx talk in 2019 and last year released his autobiography, The Happiest Man on Earth.

He received a Medal of the Order of Australia (OAM) in 2013.

“Having survived the Holocaust, Eddie chose to make his life a testimony of how hope and love can triumph over despair and hate,” Morrison said.

“He will be sadly missed, especially by our Jewish community. He was an inspiration and a joy.”

Treasurer Josh Frydenberg, who developed a close friendship with Jaku and sent a copy of his memoir to every MP in Canberra, said Australia had “lost a giant”.

“He dedicated his life to educating others about the dangers of intolerance, and the importance of hope. Scarred by the past, he only looked forward,” Frydenberg said.

Speaking in NSW Parliament on Tuesday, Premier Dominic Perrottet described Jaku as “one of our state’s most treasured citizens”.

“Eddie’s life is testament to the fact that there is one thing that even the most powerful can never take away from us and that is hope,” Perrottet reflected.

“He had a strength of character that could never be extinguished. Earlier this year, I was honoured to meet him and it was impossible not to be deeply moved by his zest for life. That meeting is something I’ll always remember.”

Former NSW premier Gladys Berejiklian, who presented Jaku with a certificate when he was nominated as the 2020 NSW Senior Australian of the Year, told The AJN, “It was an honour to be in his presence. You couldn’t help but feel you were in the presence of greatness. An intelligent, humble man, yet a giant in his attitude to life and the human condition.

“His legacy will last for generations to come.”

NSW Labor leader Chris Minns told Parliament, “Eddie was an intelligent, gentle and warm human being whose smile and manner put everyone at ease. From the highest leaders in the land, to small school children struggling to comprehend the horrors of the Shoah.”

Jaku was due to give the keynote address at the NSW Jewish Board of Deputies’ (JBOD) online Kristallnacht commemoration next month. The AJN understands the pre-recorded speech will still air. 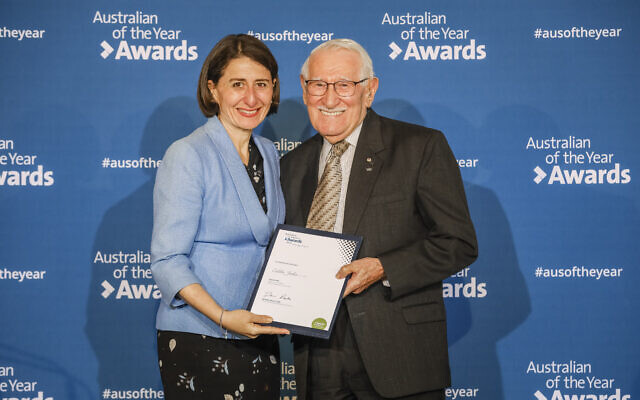 JBOD CEO Darren Bark called Jaku “a beacon of light and hope for not only our community, but the world”.

“He will always be remembered for the joy that followed him, and his constant resilience in the face of adversity,” he said. “The world is a little less bright without him in it, and we will always treasure the memories and stories we were privileged to have heard.”

JBOD Shoah Remembrance Committee chair Dane Stern added, “Eddie always made himself available for communal Holocaust commemorations – even in difficult circumstances. We were honoured to film him just two weeks ago for this year’s Kristallnacht commemoration.”

SJM CEO Norman Seligman recalled “a truly remarkable individual” who inspired and taught tens of thousands of people as a survivor guide at the museum since its inception in 1992.

“Only last week Eddie again asked me when we would reopen, so that he could come back and do the thing he really loved. Sadly that day will now never come, but the beautiful memories of Eddie’s powerful messages to an adoring audience will live on forever,” Seligman shared. 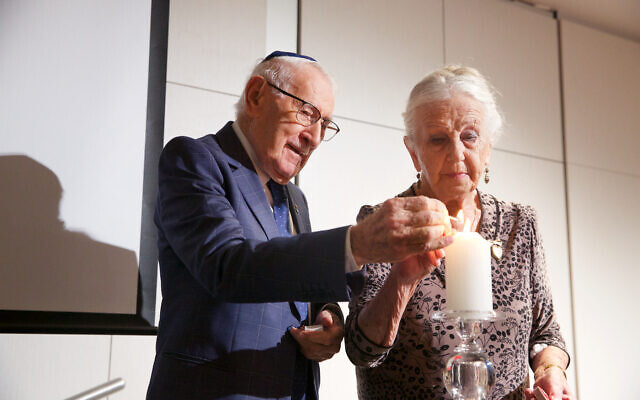 Eddie Jaku and Olga Horak lighting a candle at the Sydney Jewish Museum to mark the 75th anniversary of the liberation of Auschwitz in 2020.

Australian Association of Jewish Holocaust Survivors & Descendants president Dr George Foster added, “He will be sadly missed by the association and all who knew him. His energy, spirit, and motivation to tell the story of his horrific experiences is an inspiration to us all.”

Describing Jaku’s passing as “a devastating loss for his family, the Jewish community and Australia”, the Executive Council of Australian Jewry (ECAJ) reflected he was “a hero figure and role model for new generations”. 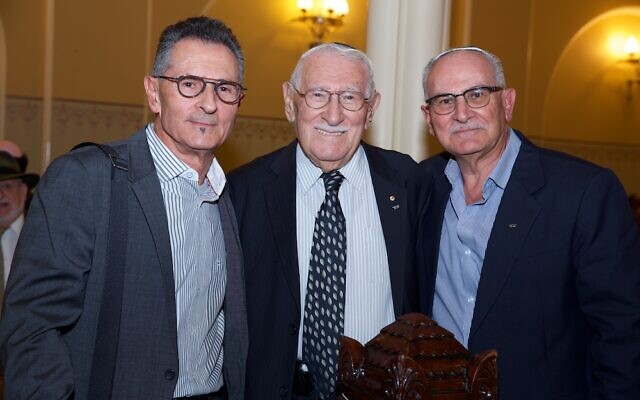 Eddie and his sons Michael and Andre.

“He offered love and understanding to all, and demonstrated by his example the futility of hatred and bitterness. He was a shining example of how living a long, happy and productive life is the best revenge,” ECAJ said.

He leaves behind his beloved Flore, devoted sons Michael and Andre, grandchildren and great-grandchildren.

“We were proud to have him as our father,” Michael and Andre told The AJN. “We’re quite incredulous at the reaction to his death. We’re getting messages from all over the world with videos of news [about him]. We knew he was very popular and people tell us how inspiring he was – to us, he was our dad.”

Jaku will be laid to rest at Rookwood Cemetery today (Thursday).