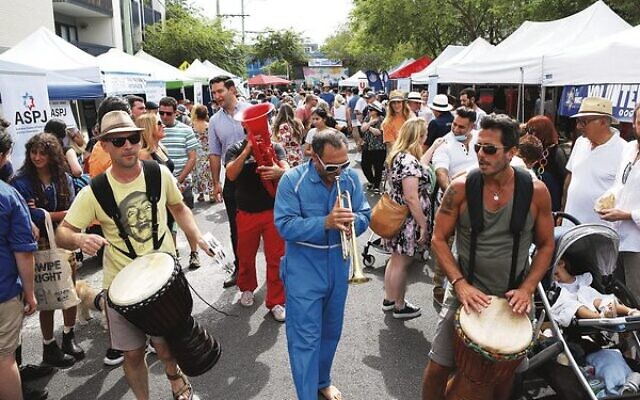 The Melbourne Jewish community's diversity was on display at the In One Voice festival in March. Photo: Peter Haskin

Since the shofar blew to mark the end of Yom Kippur 2019, none of us have been able to go to shule for the High Holy Days. This year, we won’t take for granted the familiar feeling of walking into a synagogue, hearing the shofar, dedicating time to spiritual wellbeing or just sitting next to old friends.

The past two years have been a time for many of us to take stock of our commitments, our memberships, our involvement. For some, the pandemic has provided an impetus to do more and get more involved. For some, their values have changed. And for others still, they remain anxious about spending time with large groups of people.

At the Jewish Community Council of Victoria (JCCV), the peak body for our community, we are privileged to have a bird’s eye view of Jewish Melbourne. Through listening to our affiliate organisations and community partners, the JCCV is noticing an increasingly diverse community that varies greatly in its religious practice, participation and political interests. We knew this was already the case, but the interruption caused by the COVID-19 pandemic has spurred this progression.

Our synagogues are doing their very best to fill their seats after two difficult COVID-19-affected years. In the countdown to these very special High Holy Days, we are being bombarded with marketing messages from our shules. Shorter services! International choirs! Membership prices unchanged! Many are working hard to evolve with their congregants, to create innovative programming and trial new approaches, and they should be congratulated.

In most shules, Shabbat crowds are not back to their pre-pandemic numbers. Shule boards are nervously waiting to see whether their congregants return on Rosh Hashanah. My guess is they will, and those who don’t may be choosing to join one of the many diverse services popping up in bowling clubs, council halls and youth movement centres. This should be applauded, not a cause for concern.

What the JCCV is observing is established community institutions and disruptors alike innovating and evolving.

We don’t just see this in the context of synagogues. The JCCV is tracking significant communal shifts accelerated by the pandemic and its long tail. As these shifts occur, we need to welcome and embrace those organisations, established and emerging, that successfully cater to our changing identity.

A significant change is a growing reluctance, or inability, by many to make expensive long-term commitments. For many in our community, a commitment of hundreds of thousands of dollars to pay for children to attend Jewish school is unrealistic. For others, the idea of paying thousands of dollars for their family to be members of a synagogue, especially if they attend only sporadically, does not appeal. Yet, our teachers, rabbis and communal workers need to be paid, buildings maintained and overheads covered. Disruptors are seeing the value in co-locating in existing community buildings, minimising costs and offering a user-pays model, rather than an annual membership. There are also new initiatives starting to support those unable to pay.

At a more philosophical level, we must consider how we characterise our community. The waves of migration in the second half of the 20th century – from Europe, from the former Soviet Union, from South Africa – are over. And the oft-repeated line, that Melbourne is the largest community of Holocaust survivors per capita outside of Israel, is no longer a contemporary reality but a historical fact. Our welfare agencies do an incredible job of caring for our remaining survivors, and our cultural institutions have made superhuman efforts to record the wisdom, knowledge and experience of our survivors before it became too late. We will always be intrinsically linked to the incomparable tragedy that was the Holocaust, and we will never forget it, but it is dissipating as a symbol of our collective identity.

Similarly, the broadly held assumption that the Jewish community is broadly politically conservative continues to be challenged as a marker of our community identity. Our community reflects the political diversity of the rest of the population. That diversity is obvious and apparent in 2022 as Australia, and the world, face the dual monumental challenges of pandemic recovery and climate change. Our most populous Jewish neighbourhoods straddle electorates that are held by MPs from the Labor Party, the Liberal Party and an independent (at a Commonwealth and state level). The three most prominent candidates standing for election in the District of Caulfield at the upcoming Victorian election – David Southwick, Lior Harel and Nomi Kaltmann – are all active, engaged members of our community despite their political differences. Our established organisations are moving to reflect this diversity, rather than picking one side or another.

Beyond party politics, Jewish people are increasingly aligning themselves to Jewish organisations that prioritise social justice causes: feeding and clothing the poor, supporting children with disability, assisting refugees, engaging with First Nations to progress reconciliation and responding to climate change. This, in itself, is not new. Melbourne’s Jews have been at the forefront of significant social change – consider Ron Castan leading the landmark Mabo native title case or Moss Cass, Australia’s first ever environment minister. What does seem to be increasingly common is that social justice seems to be the primary way that many Jewish people are engaging with our community. This too, needs to be recognised as an important characteristic of contemporary Jewish Melbourne

The JCCV, thanks to its regular engagement with affiliate organisations and community partners, is in a unique position to observe the metamorphosis of our community and the changes that have accelerated in the aftermath of the pandemic. As the year comes to a close, this metamorphosis should be viewed as an inspiring evolution and an opportunity for all our organisations, established and emerging.