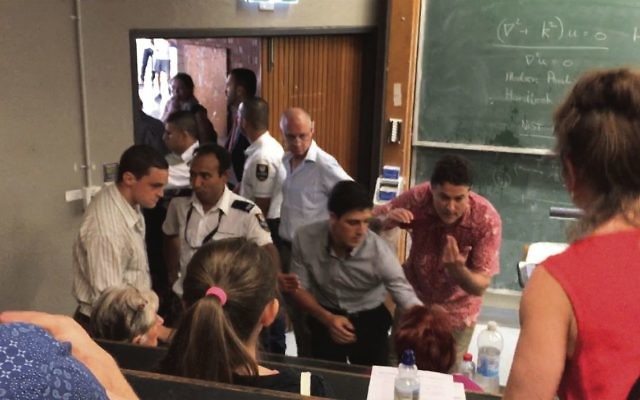 THE University of Sydney is considering downgrading its Centre for Peace and Conflict Studies (CPACS) from a centre to a department, a move the Executive Council of Australian Jewry (ECAJ) says “does not go far enough”.

The centre is headed by Associate Professor Jake Lynch, a vocal supporter of BDS, who has been embroiled in a number of controversies in recent years.

The latest was the melee during a talk by Colonel Richard Kemp last year, during which Lynch was seen goading an elderly woman after pro-Palestinian protesters stormed the room.

In 2012, he cited his support for BDS as the reason he refused to support Hebrew University academic Professor Dan Avnon with an application for a Sir Zelman Cowen Scholarship to conduct research in Australia.

The possible downgrading follows a review of the centre’s viability sparked by a decline in student enrolments, according to a spokesperson for the university.

“The centre has been expensive to maintain, because it has had to support its own administration and be housed in a separate building,” the spokesperson said. “As a department, it would be located within the School of Social and Political Sciences, where it would share more administrative support to compensate for declining enrolments and improve sustainability.”

While there will be no changes to CPACS’ programs, the department would be able to offer undergraduate units in addition to the postgraduate courses it presently offers.

ECAJ executive director Peter Wertheim said although downgrading CPACS “might seem like a step in the right direction, it does not go far enough”.

“CPACS is notorious for blurring the lines between scholarship and advocacy and for descending at times into crude propaganda,” Wertheim said, noting that the university’s 2014-2015 review of CPACS activities raised concerns that it does not sufficiently distinguish between advocacy and its core academic roles.

“Until these recommendations have been fully implemented, CPACS should not continue to offer courses under the imprimatur of the University of Sydney,” he said.

Wertheim added that the reconstitution of CPACS as a department in the Faculty of Arts and Social Sciences “may well be unwelcome news to many academics in other departments in that faculty, who have expressed concern about the potential for their reputation for scholarship, being compromised by an association with CPACS”.

Lynch, meanwhile, denied claims demand was down. “This year, as every year for the last five years, there will be more students in CPACS’ Units of Study than in those of any other specialist postgraduate degree program offered by the School of Social and Political Sciences,” he told The AJN.