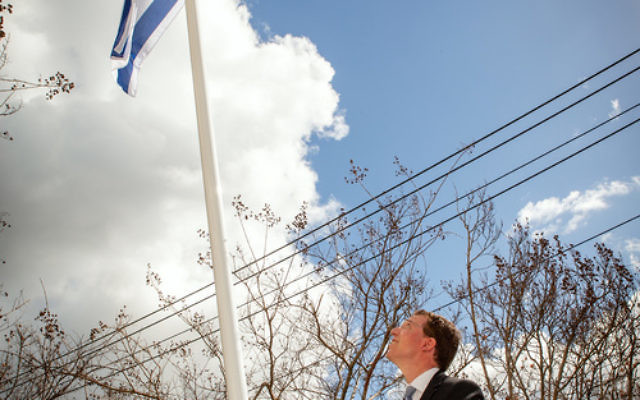 BLUE sky and white clouds matched the colours of Israel’s flag as it was hoisted on a community flagpole at St Kilda Town Hall on Monday morning – believed to be the first time the Israeli banner has flown on an Australian municipal flagpole.

The ceremony launched what will be an ongoing multicultural flag-raising program by Port Phillip Council, which will see flags of various nations flown.

Israel’s flag will fly from “community flagpoles” at St Kilda, South Melbourne and Port Melbourne town halls over the next two weeks, in time for the High Holy Days.

“The raising of the flag in the heart of St Kilda also pays tribute to a strong, involved and thriving Jewish community, composed of many Holocaust survivors who have made this city their home and have made such an enormous contribution to the country,” he said.

Abramovich said an antisemitic incident in the Port Phillip Council chambers became the catalyst for the community flag-raising program. Last November, 30 silver coins were left on the desk of Port Phillip councillor Dick Gross, who is Jewish, amid allegations he had betrayed the Greens with his vote in the mayoral election, invoking the biblical image of Judas Iscariot’s betrayal of Jesus Christ.

At a council meeting, each councillor had formally condemned the act, and council approved a motion to find community programs reflecting inclusiveness. After the flag raising, Mayor Voss told The AJN, “I think it’s really appropriate that this flag is the first because of the issue that happened within our council.”

In her address, the mayor paid tribute to Port Phillip councillor Marcus Pearl, who worked with Abramovich on making Israel’s flag the first to fly under the program.

“The aim of this important project is to enhance community life in Port Phillip,” said Voss, “promoting and embracing our many and diverse cultures. The community flagpoles encourage groups and individuals to promote respect for all … and we certainly encourage the flags to be displayed brightly and proudly.

“Today we’re raising the flag of Israel and respect the chance to recognise this wonderful culture and its influence on our city.”