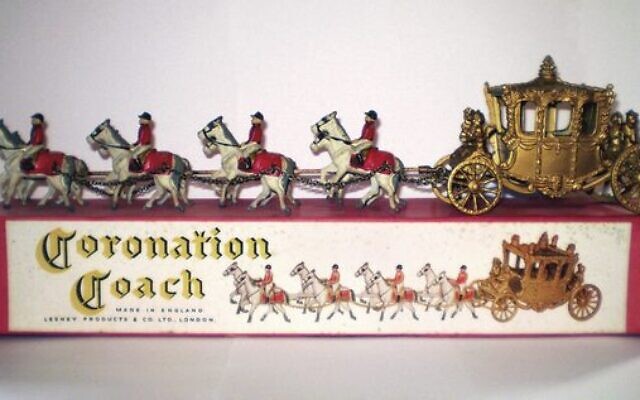 A coronation set similar to that mentioned.

Tuesday, June 7, 1977: Seven years old, peering through a red, white and blue cardboard periscope, I try get a glimpse of Queen Elizabeth II as her gold carriage passes down the Mall to the cheers of the wellwishers lining the parade route for her silver jubilee.

We return home for a festive lunch with family and friends, my father’s hand-painted, cast-iron miniature model coronation set from his own childhood in 1953 takes pride of place in the centre of the dining table.

Wednesday, July 29, 1981: Eleven years old trying to crane my head above the crowds lining the Mall to get a glimpse of the Queen as her carriage heads towards St Paul’s Cathedral for the wedding of her eldest son, Prince Charles, to the fairytale princess, then known simply as Lady Di.

Interestingly, though four years older, I don’t recall whether the coronation set was out. But I do remember that my uncle had recorded the ceremony on one of those new-fangled video recorders and, when watching it back, pressed pause at certain points so he could point his camera at the screen and take close-up photos of the various royals as if he was there.

School: No idea how old or what year, but we were dragged along to Queen Elizabeth II’s opening of some Commonwealth conference at Westminster Hall. We were way at the back, the room was cold, we couldn’t see or hear a thing. It was a really dull day out.

Some time in 1992: Twenty-two years old, invited to join the writing team of a new sitcom called The House of Windsor. It’s at a time when royal marriages are falling apart, castles are burning down and there’s one soap-style scandal after another. The Queen dubs the year her “annus horribilis” … and we’re working on a show that’s all about the crises she and her family are facing.

We speak to sources at the palace to get the inside scoop, but despite all the research and the hostile headlines screaming how dare we mock the monarch, the biting satire we’d set out to make ends up being a far from funny farce and an absolute flop. Quite why it failed is interesting given the pedigree of the team: Robert Bernstein who went on to script edit the Golden Globe and Bafta-winning movie Mrs Brown; Russell T Davies, the legend behind the 2005 resurrection of Dr Who; Bafta-nominated soap writer Chris Fewtrell; Bafta-winning scriptwriter Sally Wainwright; and comedy writer Kim Fuller, the man who put the Spice Girls on the big screen in Spice World!

And then there was me, of course … who 30 years later went on to become executive director of Zionism Victoria.

Yes, as editor of the UK Jewish News, I lamented in print that the Queen – and indeed no member of the Royal Family – had ever visited Israel in an official capacity. Philip had gone there when his mother was named a Righteous Among the Nations, and Charles had attended the funerals of Yitzhak Rabin and Shimon Peres … but a state visit? As Tevye was wont to say, “Unheard of, unthinkable!”

With the British Foreign Office keen to keep the oil-rich Arab world on side, giving Israel the royal seal of approval was never going to happen. And apart from those of us who see antisemites lurking around every corner and hiding in every bush, we accepted there wasn’t much “Her Maj” could really do about it.

That tricky Israel issue aside, she was loved and revered by the community, as reflected in the sincere outpouring of grief from communal leaders.

As for our new King, despite the emergence a few years ago of a rather naive letter he penned in 1986 following a trip to the Gulf, he has been a great friend.

Patron of World Jewish Relief, he has made personal donations to their projects alleviating the suffering of elderly Jews in Eastern Europe and always seems comfortable wearing his own personal kippah, emblazoned with his Royal Crest, on his frequent visits to synagogues and communal functions. Indeed, if I recall correctly, his very first public outing with the now Queen Consort Camilla was to a Jewish friend’s chuppah in shule.

Furthermore, in 2020, just before the pandemic, he did in fact make an official visit to Israel, addressing the World Holocaust Forum in Jerusalem. The Shoah is a subject he has shown a keen interest in over the years, spending time with survivors and expressing his concerns over resurgent antisemitism.

And he clearly enjoys his interactions with Jewish spiritual leaders, making no secret of the respect in which he held the late chief rabbi, Lord Jonathan Sacks.

I’ll admit, I’ve always been a Charles fan, even during the Di years when he was universally maligned. Yes, that was not a good marriage and there’s no question he must shoulder a hefty chunk of the responsibility.

But one dreadful debacle of a relationship aside, he comes across as someone who really cares about improving the world we live in. Way, way back before it was fashionable, he was outspoken in his concern for the environment. And the Prince’s Trust he established in 1976 has done an incredible amount of good work improving the life of disadvantaged youngsters.

To me King Charles seems dedicated to making life better for those who haven’t enjoyed the wealth or privileges he was born in to. And what more can one want from a monarch than that?

As an Englishman abroad, I won’t have the opportunity to line the route – as I did in 1977 and 1981 – for this the Queen’s final journey. But I look on from afar, recalling those moments that her life and my life intertwined.

Under Good King Charles may the ­royals continue to impact on us all in the most positive and uplifting of ways. And, as we say week after week in synagogue, may he and his counsellors deal kindly and justly with all the House of Israel. Amen.