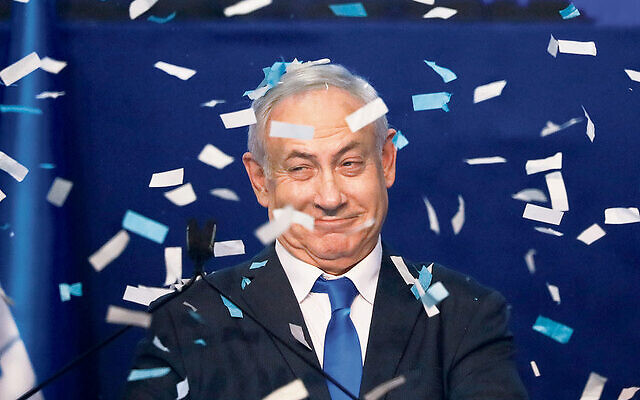 ISRAELIS have gone to the polls for the third time in 12 months and this time it appears they may have narrowly elected Benjamin Netanyahu and his Likud-based coalition. But while it may be third-time lucky for Bibi, the outcome raises more questions than it answers.

If the exit polls are accurate and Netanyahu and his supporters can snare one or two extra seats to gain a majority, some serious issues will need addressing.

The first is whether President Reuven Rivlin, newly back in Israel from his landmark visit to Australia, will be in a legal position to invite Netanyahu to form a government, due to Bibi facing prosecution on charges relating to fraud, bribery and breach of trust.

We are in uncharted waters here, and Israel’s High Court may be called upon to hand down a ruling. It could set a new government on a collision course with the judiciary, pitting the principles of democratic election and the rule of law against each other; two principles reverently enshrined in Israel’s civic culture. Some observers speculate Bibi could work out a plea bargain.

From a policy perspective, the re-election of Likud could rapidly lead to the controversial annexation of territory in the West Bank, with the support of US President Donald Trump.

It would also keep ultra-Orthodox parties, whose support Netanyahu relies on, in an ongoing position of dominance over the domestic agenda on divisive issues such as conversion and marriage.

A Likud government is also likely to sharpen the already chafing rift between Israel and a mass of Diaspora Jews, particularly in North America, whose allegiance to non-Orthodox streams of Judaism and liberal values is often at odds with the philosophies and policies of Likud and parties it allies with.

In Australia, we can only hope the next Israeli government finally helps facilitate the return of alleged child-sex abuser Malka Leifer to Australia to face justice. If Israel’s Health Minister Yaakov Litzman – who as deputy minister allegedly meddled in Leifer’s extradition case – retains the health portfolio, that would be a gloomy sign indeed.