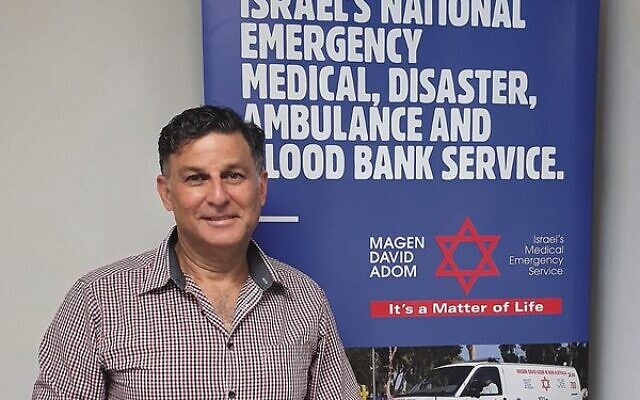 There were many mixed emotions, from the joy and honour at being at the opening ceremony of the Marcus National Blood Services Centre in Ramla – a world-class building to protect the blood supply of Israel; the eerie sound of the Yom Hazikaron two-minute siren and standing silent in the middle of a major road in Tel Aviv with cars just stopped around me; in juxtaposition, the madness of people everywhere enjoying the excitement, fun and uniqueness of Yom Ha’atzmaut; the sense of purpose and fulfilment performing a shift in an MDA ambulance and helping a patient to hospital and the sick feeling in my stomach, when we were told we were 20 minutes away from the terror attack in Elad from our MDA gathering nearby.

What made the difference for me while in Israel, was knowing that Israel’s second line of defence, Magen David Adom was there. I knew a medicycle, ambulance and the 26,000 volunteer paramedics, EMTs and medics on call would be at an incident in less than a few minutes.

The 30,000 men and women behind MDA are amazing, dedicated, passionate and fearless people and I got to know some of them – that was the biggest mitzvah.

Australian Friends of Magen David Adom are honoured to contribute to this historic project, Israel’s opening of the world’s most protected (cyber, earthquake and rocket proof) shielded blood bank, a $US135 million project which will oversee the production, storage and treatment of all of Israel’s blood supply for civilians and the military.

The centre also houses the Milk Bank, funded by our donors, which provides breastmilk to premature and seriously ill babies in Israeli ICUs, including babies whose mothers are unable to breastfeed because they are in critical care themselves.

I thank all our donors who generously contributed to the centre and to everyone who helped make this lifesaving critical project possible. 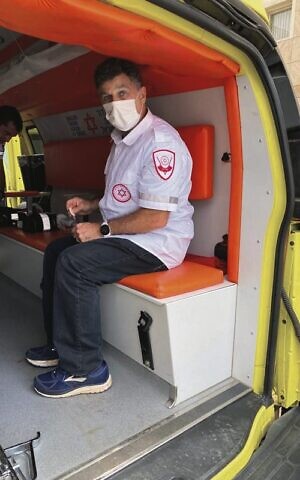 MDA CEO David Freed on an ambulance shift in Israel.

During the conference, the Yom Hazikaron ceremony was held in the new Blood Centre, attended by worldwide MDA representatives, MDA Israel personnel, dignitaries and MDA volunteers and workers from the Ayalon region.

I was moved by two families who told their story of how they lost their young ones to terror attacks – their pain was deep, and I don’t think there was a dry eye in the auditorium.

These family members were young MDA volunteers. There was a deep feeling of love and respect for their commitment as young MDA volunteers who left this world too soon. The overwhelming feeling in the room was one of unity in the fight to save lives.

On Yom Ha’atzmaut, I was very fortunate to join in the celebrations on the streets of Tel Aviv, from watching street performers during the day (including a re-enactment from the historical home of Ben Gurion) to joining in the ongoing celebrations in Dizengoff Street late at night with the team and donors from MDA UK. This is a very special time of the year to be in Israel, encompassing the lows of Yom Hazikaron through to the highs of Yom Ha’atzmaut.

During the celebrations, MDA teams treated and attended to emergency calls for help including the terror attack in Elad where seven victims were treated.

I also was fortunate enough to have the opportunity of joining an ambulance shift on a MICU.

The feeling that you are a part of a team, helping fellow Israelis, regardless of who they are is so intense and meaningful, it goes directly of the heart of the human spirit.

That spirit is the essence and core of MDA. This is what drives us to continue to support MDA and their initiatives.

While I was in Israel, there were two attacks, one 20 minutes from where we were staying for the day and the other about one hour away. Those attacks saw MDA teams respond within seconds and treat and transport victims to hospital.

Now that I have experienced Israel through the lens of an MDA paramedic, I am immensely proud of the MDA teams who continue to work day and night on their routine activities, attending to emergency calls for help, no matter the race, religion or ethnicity of the person in need.

Our mission is to save lives and I thank you for your ongoing support to help us achieve this.