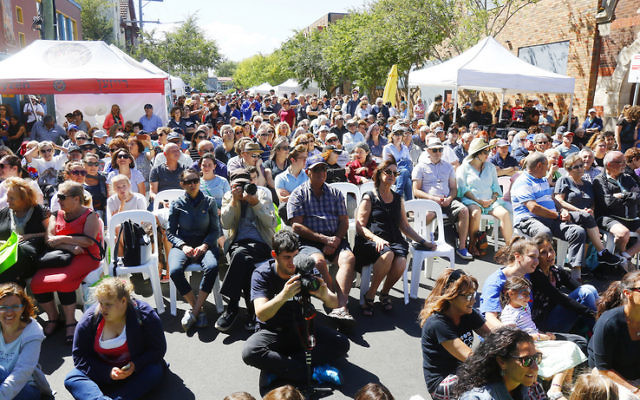 THOUSANDS of people descended upon Selwyn Street, Elsternwick on Sunday to enjoy the In One Voice street festival, a celebration of Jewish culture.

The street was lined with stalls, allowing visitors to meander through an array of offerings from community groups. For the first time, the festival also occupied the former ABC site which housed the Nosh Tent, kosher food trucks, the With One Brush art exhibition and kids’ zone.

“Not even gale-force winds – which thankfully calmed down later in the afternoon – could stop it being a great day for everyone.”

Entertainment was also to be found on the stage which hosted a range of musical acts, Hello Tut Tut, Approachable Members of Your Local Community, school and community choirs and dance troupes, and crowd favourites, YID!, who had also wowed the previous night at the In One Night concert.

On Sunday, for those more food-inspired, Dani Valent demonstrated a different take on the humble matzah ball in the Nosh Tent, while Aloma Treister introduced home cooks to Iraqi style charoset recipes, and Ken and Esther Daniels shared unique dishes from their Indian-Jewish heritage. Ensuring that the Ashkenazi palate was not forgotten, Helen Mizrachi demonstrated her mother’s tzimmes recipe.

Jack Heffes took out first prize for the best cake in the Impact Pesach Bake-Off competition for his hazelnut and pear torte, and Diane Shonberg received the best biscuit award as judged by award-winning chef Pierrick Boyer.

Meanwhile, Amanda Toniolo received $1000 and the title of winner of the adult prize of the With One Brush art exhibition for her painting, St Kilda Tram. Tanya Zail topped the secondary school (year 10–VCE) division for her photo, Dancer, while Misha Beaconsfield was awarded the secondary school (year 7-9) prize for her pottery piece, Dachsie Vase. Jada Herz won the primary (year 4-6) section with her drawing, Dog.

“In One Voice includes and has something for everyone, Jewish people of all persuasions and non-Jews who come and shep naches from what the Melbourne Jewish community has to offer,” noted Weizman.

“Fun, food, music, art, community – what more could you want?”