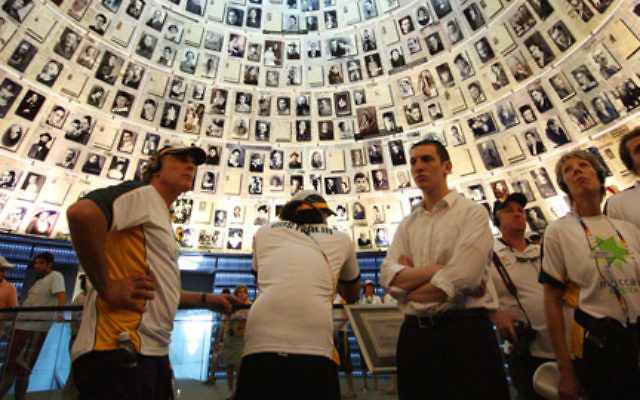 THIS week we commemorated International Holocaust Remembrance Day. The commemoration was put on by Holocaust museums across Australia. Notable speakers included Prime Minister Scott Morrison, Josh Frydenberg MP, Senator Penny Wong, Justice Michael Kirby, Holocaust survivor Olga Horak, along with various members of our community. Traditionally the day was commemorated by Jewish organisations, in the main, within their own communities. This federal event, while still organised by our community, is more in step with how the day should be organised.

Some may wonder what the purpose of International Holocaust Remembrance Day is, given that our community traditionally commemorates the Holocaust on the 27th of Nissan, which usually falls in April.

International Holocaust Day was designated by United Nations resolution 60/7 in 2005. The resolution was proposed after a special session of the UN to mark the 60th anniversary of the liberation of Nazi concentration camps. The resolution was an initiative of the State of Israel. The essence of the text lies in its twofold approach: one that deals with the memory and remembrance of those who were massacred during the Holocaust, and the other with educating future generations of its horrors.

The date chosen, 27th January, was the date that Auschwitz concentration camp was liberated by the Red Army in 1945. The choice is an interesting one, that likely reflects the strength of the “brand” that Auschwitz has become (Not without good reason), in representing the horrors of the Holocaust. In fact, given the paucity of knowledge about the Holocaust amongst today’s youth it is unlikely that any other Concentration Camp or Holocaust milestone has as strong recognition. In a recent poll, Two-thirds of American millennials surveyed could not identify what Auschwitz is. Furthermore, Twenty-two per-cent of millennials in the poll by the Conference on Jewish Material Claims Against Germany said they hadn’t heard of the Holocaust.

Of course, the Liberation of Auschwitz did not mark the end of Nazi Concentration Camps. My mother, Herta Hochberg, who in fact had also been interned in Auschwitz, was liberated from Bergen-Belsen Concentration Camp. But not until April 15th, 1945.

Similarly, Buchenwald concentration camp was liberated on April 11, 1945. Dachau, Mauthausen and many other Camps were to follow.

Thus January 27th was a liberation day for some, but not for others. This is not to take away from the special place that Auschwitz holds in the Holocaust, or the glory of its liberation. Rather it raises the challenge of how and when to commemorate an event so evil, so large in scale and scope.

Our Yom Hashoah date was established by the Knesset (Parliament) of the State of Israel in 1951; to be world Jewry’s Annual Remembrance Day for Victim’s of the Holocaust. This is one of only four new official days that has been added to the Jewish Calendar in more than 2000 years, the others relating specifically to Israel, namely; Yom Hazikaron, Yom Ha’atzmaut, and Yom Yerushalayim.

The date chosen is in fact a compromise as a result of a tug of war between the ghetto fighters who wanted the day as close to the 14-15 Nissan (to mark the beginning of the Warsaw ghetto uprising) and the Orthodox who wanted to push the date as far back as possible from Passover so as not to infringe on the prohibition of mourning and eulogies in the month of Nissan.  After much debate, the 27th Nissan was agreed to. It satisfied no one. The Orthodox were unhappy it was in Nissan and seen as a violation of halakhah. The fighters were unhappy because the commemoration was not on the day of the uprising. Whilst the date is a compromise, it does achieve some symmetry by its connection to Yom Ha’atzmaut. Thus Yom Ha’atzmaut becomes a fundamental response to Yom Hashoah.

The choice of a date that “celebrated” the defiance of Jewish Resistance Fighters as the date to commemorate, says a lot about the politics of the State of Israel at the time. Israeli author Tom Segev, in the Seventh Million, writes “This is no accident: from the very start, Holocaust memorial culture was meant to be an integral part of the secular national symbolism of the Zionist movement and the State of Israel”.

In fact, after becoming Prime Minister, Menachem Begin, who wanted to deny the Labor movement’s version of National mythology, suggested doing away with the stand-alone commemoration and combining it with Tish B’Av, the religious day of mourning for the destruction of the two Temples. The proposal created uproar and was rejected.

With the passing of the survivors, greater attention and effort will be required to ensure that memory of the disaster is not lost and that education ensures a true telling of history in light of the growth in Holocaust denial.

Anzac Day, and its re-birth in Australia provide an example of how this can be achieved successfully. It works not because of the magnitude of the Wars commemorated, but because the stories of those who participated are told, and resonate with a new generation.

We must find ways to achieve the same with Shoah. Our Holocaust museums, now in every State, play a big part in achieving this.

We need to clearly define our Commemorations, so as not to confuse a public often illiterate of the detail of the Holocaust.

This week’s Holocaust Remembrance Day should be embraced by our Federal Government, and be seen as a national event. A National Memorial on Anzac Parade in Canberra, similar to those in other countries, would be a fitting backdrop to such a commemoration. Although the 27th January is problematic for Australia (So close to Australia Day and at a time when Parliament is in recess), none the less, it is both an imperative to commemorate given Australia is the home to so many survivors, and an obligation under UN resolution 60/7.

Yom Hashoah, as designated by the State of Israel, should remain the date of Commemoration for our Community, with events taking place in each State or wherever Jews congregate. It is not exclusive to Jews, with many politicians, Diplomats, leaders of other communities and NGOs as well as private citizens from outside our community participating. But, it should remain a personal event, a time to identify with the victims of the Holocaust as individuals. This is particularly important for our remaining survivors, and the second generation and all who follow them.

Danny Hochberg is the former chair of the NSW JBOD Shoah Remembrance Committee and a current board member of a number of Jewish community organisations.