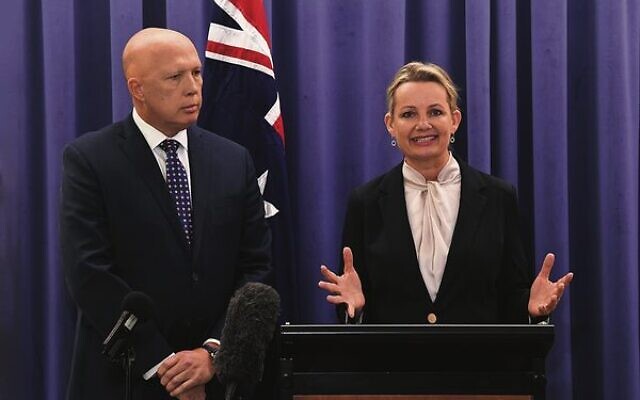 Newly minted deputy Liberal leader Sussan Ley told The AJN this week she is “pleased to be given the opportunity to affirm my support for the Liberal Party’s position on Israel”.

Ley, who along with new leader Peter Dutton was elected unopposed this week, had in the past made several speeches highly critical of Israel.

But she told The AJN on Tuesday that since she last spoke publicly on the matter of Israel and Palestine, “a few things have changed”.

“First the United Arab Emirates, the country where I grew up, is now one of several countries which has signed the Abraham Accords, recognising Israel, and is no longer calling for the unilateral recognition of a Palestinian state,” she said. “Second, Australia under the Morrison government has listed Hamas in its entirety, as a terrorist organisation.”

Ley has also agreed to visit both the UAE and Israel with Jewish Liberal MP Julian Leeser, with whom she has been speaking on these matters. She said the purpose of the visits is to “see how things have changed”.

“I look forward to ongoing dialogue with local groups and communities from the region who share a strong commitment to peace and security,” she said.

Congratulating Dutton and Ley on their new positions, Zionist Federation of Australia president Jeremy Leibler said, “Mr Dutton has shown through his actions that he is a strong friend of the Australian Jewish community, and of Israel.

“We are confident that this new leadership team will continue the long history of bipartisan support for Israel, and we look forward to engaging with them.”

Australia/Israel & Jewish Affairs Council executive director Colin Rubenstein echoed these sentiments, saying, “We are confident that under [Dutton’s] leadership the strong support for Israel and our community we have long enjoyed from the Coalition, including during the Morrison government, will continue.”

Executive Council of Australian Jewry co-CEO Peter Wertheim congratulated Dutton and Ley on their new roles, saying, “As was observed by the party’s founder, Robert Menzies, a party should regard its time in opposition as an opportunity for renewal of its platform and policies so as to restore its unity, sense of direction and electoral appeal.

“We wish Peter Dutton, Sussan Ley and the Liberal Party all the very best in the important tasks that lie ahead.”