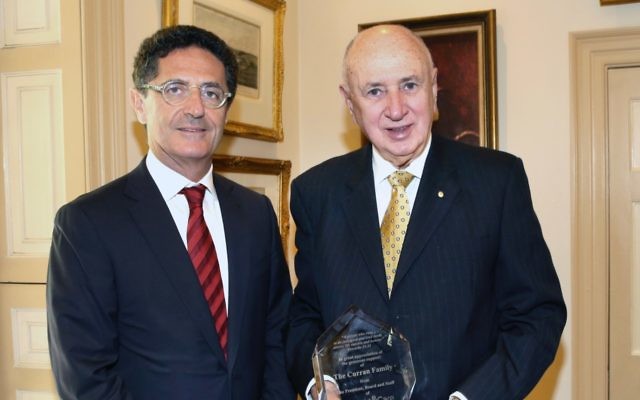 JEWISHCARE and the Sydney Jewish Museum (SJM) are not separate from the wider community, they are “a part of the community”, prominent non-Jewish philanthropist Charles Curran told The AJN.

The Curran family is well known for its association with a number of not-for-profit organisations, particularly St Vincent’s Hospital and the Australian Indigenous Education Foundation.

Curran, who recently made a $50,000 donation on behalf of his family to JewishCare, first became acquainted with the organisation in 2012 when his son purchased the former home of JewishCare in Woollahra and restored the heritage property to its former beauty as a family home.

Speaking to The AJN, Curran said he was greatly impressed by the “wonderful new premises” at Saber Street, Woollahra, and said he decided to support the organisation because of the “very good work that it does”.

“We are very fortunate that well- managed and caring organisations like JewishCare exist to help people who are going through a difficult time,” he said.

“Having seen the somewhat cramped conditions of what had been happening at Woollahra I can just imagine how pleased the staff were and, more importantly, the clients of JewishCare to get a modern premises.”

Curran added: “I know our donation will be put to good use by the board and the wonderful staff of JewishCare in helping to improve people’s lives.”

The donation was accepted by JewishCare president Allan Vidor, who said the organisation is “absolutely thrilled and appreciative” for this “most generous donation”.

“I have come to know Charles and his family over a number of years and have been greatly impressed by the leadership they take in philanthropic activities,” Vidor said.

“Charles took a genuine interest in what JewishCare has been doing … and JewishCare is grateful for [the Curran family’s] acknowledgement and support.”

Curran, who has also supported the SJM, said: “I was enormously impressed by the work conducted there, and our family has been able to provide some modest support for the work there.”

Stating that two significant stories for him told by the SJM are the story of the very early days of Sydney and the contribution made by Jewish people, and the “appalling story” of the Holocaust, he added: “It’s so important that that story be known to our modern generation of young Australians so that we can never allow anything like that to happen again.”