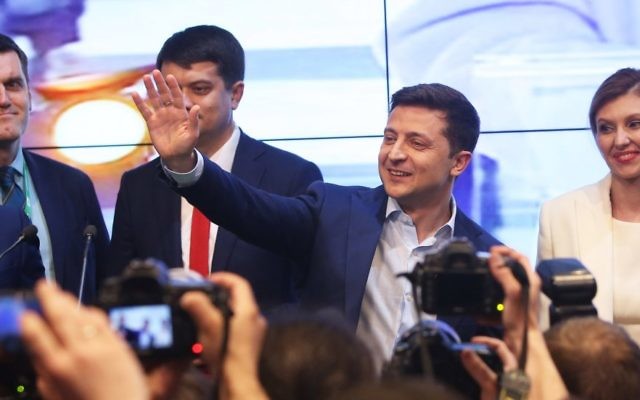 Volodymyr Zelensky, second from right, waves to supporters at his campaign headquarters in Kiev, Ukraine, April 21, 2019. He won the country’s presidential election with over 70 percent of the vote. Photo: Xinhua/Sergey/Getty Images

WHICHEVER way the war goes in Ukraine, Volodymyr Zelensky has etched his place in history as a hero of his people.

The Jewish Ukrainian President has been the protagonist of a modern day David and Goliath story, valiantly standing up to Russia’s invasion and its president Vladimir Putin.

But while we salute his heroics, his speech to the Israeli Knesset on Sunday night (early Monday morning AEDT) can and should be criticised.

No one can blame Zelensky for sounding desperate given the hour.

But as a Jew, albeit a secular one, the Ukrainian President should have known that using Holocaust and Nazi comparisons would not endear him to his audience.

What is happening right now in Ukraine is heartbreaking. More than 900 civilians have lost their lives, at least 75 of them children.

Over three million people have fled the country while more than six million have been internally displaced.

But as dire as the situation is, it is not comparable to the Holocaust and to try to do so is disingenuous.

Putin may be trying to conquer Ukraine – which is to be categorically condemned – but he isn’t out to systematically exterminate its entire population.

Problematic too was Zelensky’s declaration that “Ukrainians made their choice 80 years ago. We saved Jews and that’s why there are Righteous Gentiles among us.”

While it may be true of some Ukrainians, it ignores the many that collaborated with the Nazis and the country’s failure to investigate and prosecute them.

Finally, he must know that if Israel acquiesced to his demand that it definitively take sides or provide weapons, its own security would be put at risk.

Jerusalem has an unspoken agreement with Moscow that allows it to act to contain Iranian activity in Syria; toying with this balance could be disastrous.

Perhaps it was the words of a man at the end of his tether, exhausted and desperate to save his country from the ongoing bloodshed that is laying it to waste. Emotion clearly overcame him.

Like everyone else, it seems that heroes, too, have flaws.