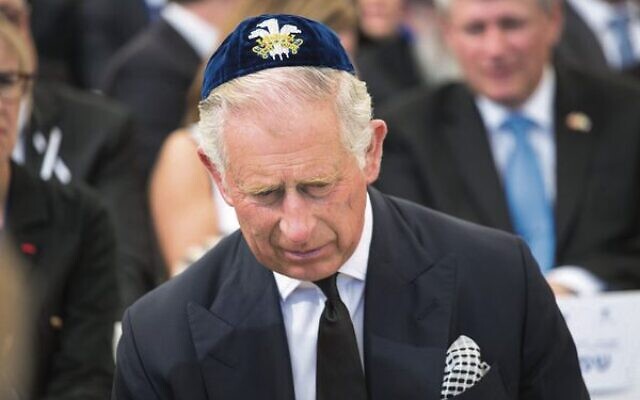 With the passing of Queen Elizabeth II, the United Kingdom has a new king in Charles III, who at the age of 73 is the oldest person to ascend the British throne.

Charles has long had a good relationship with British Jews, and in recent years has also shored up his bona fides with Israel.

The royals have a deep historic connection to the Jewish State, with Britain ruling the land from 1920-1948. In 2020, then-president Reuven Rivlin noted to Charles during a visit to Israel that he and other Israelis of his generation were born as subjects of Charles’ grandfather King George VI.

Charles himself has abiding ties to British Jewish leaders and institutions, and has shown a keen interest in the stories and lessons of the Holocaust. He has had warm meetings in recent years with two Israeli presidents and toured the country in a historic 2020 visit.

Here are some of the highlights of the new British monarch’s connection to Jews, the Jewish State and related matters.

In 2020, Charles conducted his first official visit to Israel, after previously making brief trips for the funerals of Yitzhak Rabin and Shimon Peres. He was the most senior member of the royal family to hold such a visit since the establishment of the state, following his son William’s first-ever official royal visit in 2018. The queen never went to Israel.

While in the country to attend the World Holocaust Forum, Charles met with then-president Rivlin and planted a tree at the President’s Residence in Jerusalem.

Charles met with a group of Holocaust survivors at the Israel Museum in Jerusalem and toured the Dead Sea Scrolls exhibit. He also attended a reception at the home of the British ambassador in Ramat Gan, where he was shown various Israeli scientific and medical innovations. 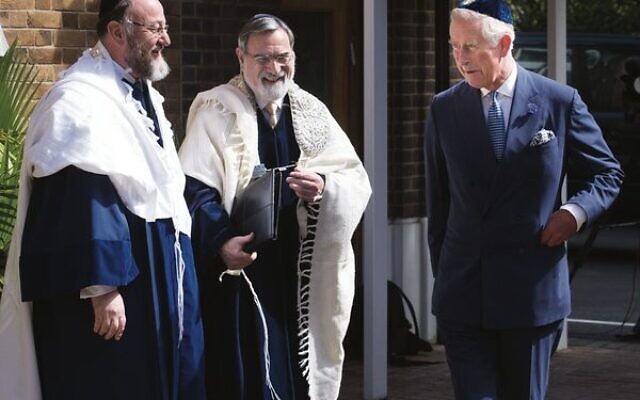 Charles’ grandmother, Princess Alice of Battenberg, is buried at the Church of Mary Magdalene on the Mount of Olives in Jerusalem. During his trip, Charles visited her gravesite and has done so on private visits.

The princess is recognised by Yad Vashem as a Righteous Among the Nations for helping save a Jewish family in Greece during the Holocaust. Charles said her actions were a source of “immense pride” and inspiration for him and the royal family.

In November 2021, President Isaac Herzog met Charles during an official visit to the UK, and the two discussed climate change, regional threats and Holocaust education. In a “special gift” to the British royal, Herzog announced a nursing scholarship at the Hebrew University of Jerusalem dedicated to Princess Alice that the President’s Office said “pays tribute to [her] compassion, deep spirituality and immense perseverance to help those in need”.

The world must “be fearless in confronting falsehoods and resolute in resisting words and acts of violence”, he said. “We must tend the earth of our societies so that the seeds of division cannot take root and grow.”

Charles has in the past warned of the dangers of rising antisemitism and other forms of intolerance in the UK.

In 2022, Charles commissioned portraits of seven Holocaust survivors to be displayed at Buckingham Palace for International Holocaust Remembrance Day.

In a 2019 pre-Chanukah reception at Buckingham Palace, Charles celebrated “the contribution of our Jewish community to the health, wealth and happiness of the United Kingdom”.

“In every walk of life, in every field of endeavour, our nation could have had no more generous citizens, and no more faithful friends.”

He noted then prominent members of the British Jewish community and their contributions to society at large, as well as “those who are not household names, but who are the cornerstones of their own local communities”.

Charles was also close to former UK chief rabbi Lord Jonathan Sacks. Upon Rabbi Sacks’ death in 2020, Charles mourned him as an “irreplaceable loss” and “a trusted guide, an inspired teacher and a true and steadfast friend”.

“Through his writings, sermons and broadcasts, Rabbi Sacks touched the lives of countless people with his unfailing wisdom, with his profound sanity and with a moral conviction which, in a confused and confusing world, was all too rare,” he said.

“He and I were exact contemporaries, born in the year of the foundation of the State of Israel and, over many years, I had come to value his counsel immensely.

“I shall miss him more than words can say.”

Defender of all faiths?

In 1994, Charles said that when he became king he could be “defender of faiths” rather than taking the traditional vow to be “Defender of the Faith”.

He later clarified his position in a 2015 interview with the BBC, saying, “As I tried to describe, I mind about the inclusion of other people’s faiths and their freedom to worship in this country. And it’s always seemed to me that, while at the same time being Defender of the Faith, you can also be protector of faiths.”

During his 2020 visit to Israel, Charles also visited the West Bank and met with Palestinian leaders. He said then that he was heartbroken to witness the “suffering” and “hardship” endured by the Palestinians.

The remarks were described by Britain’s Sky News as constituting “the biggest show of support that a member of the royal family ever has [expressed] for the Palestinians”. 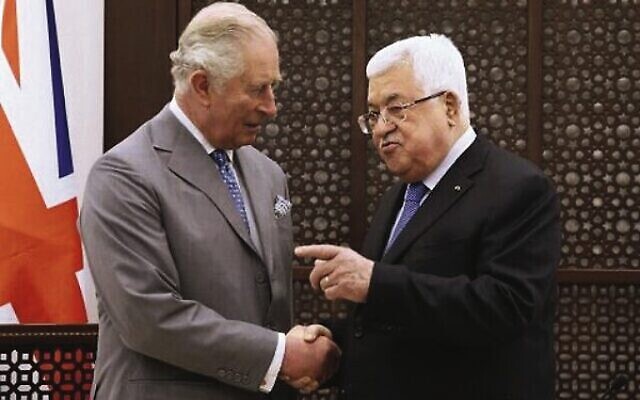 Visiting Bethlehem, the town revered by Christians as the birthplace of Jesus, Charles said, “It breaks my heart … that we should continue to see so much suffering and division. No one arriving in Bethlehem today could miss the signs of continued hardship, and the situation you face.”

Speaking at Casa Nova, a Franciscan pilgrim house near the Church of the Nativity, Charles went on, “And I can only join you, and all communities, in your prayers for a just and lasting peace. We must pursue this cause with faith and determination, striving to heal the wounds which have caused such pain.”

He added, “It is my dearest wish that the future will bring freedom, justice and equality to all Palestinians, enabling you to thrive and to prosper.”

“I’ve always loved Leonard Cohen’s voice and his whole approach to the way he sang,” he said. “He was obviously incredibly sophisticated in the way he sang, but also wrote. I find it very moving, the words are so extraordinary, sort of Salvador Dali-like, they lead you into this remarkable Dali-like world.”

Charles has also spoken in the past about his friendship with Else Mayer-Lismann, a music academic who fled to the UK from Nazi Germany and who taught him to love the opera.

“I was incredibly fortunate to have been introduced to Else Mayer-Lismann back in the ’80s by an old friend of mine,” he told The Telegraph once.

“Else was a wonderful character, and her deep knowledge of opera and music was infectious. Her descriptions and explanations of the background to various operas – particularly those of Wagner – made the whole difference to my subsequent enjoyment of the actual performance and transformed the experience.”

Richard Wagner – whose grandiose and nationalistic 19th-century literary and musical work is infused with antisemitism, misogyny and proto-Nazi ideas of racial purity – was Adolf Hitler’s favourite composer and his music was played in Nazi concentration camps.

On Ukraine and Putin

He has been more careful in his comments on the 2022 war, but in May he travelled to Romania to visit Ukrainian refugees, mostly women and children.

“We feel for you greatly, it’s a nightmare situation,” he told them then. “I’m full of admiration for the Ukrainian people. Total, extraordinary courage and resilience.”