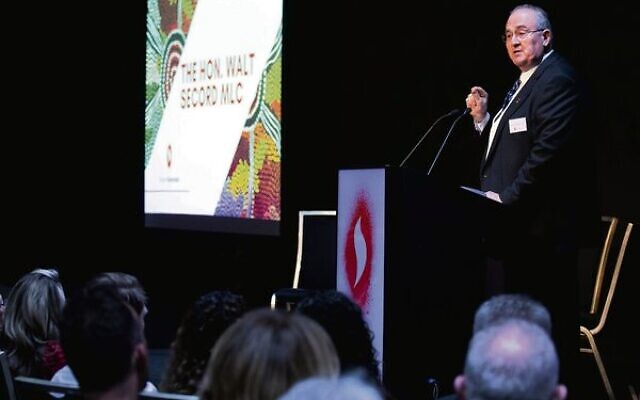 “A further five students are due to graduate later this year, including two more doctors, bringing our total medical graduates to 29,” the program’s executive director Gina Cohen said.

“We now have the largest cohort ever, with 28 Indigenous students living in Shalom College.

“This organisation is a testament to the vision of our trustees, and to those in the Jewish community who responded to an unmet need, recognising that providing residential scholarships would be the tipping point that would help Indigenous students achieve their academic potential.”

In a heartfelt speech, retiring NSW Labor shadow minister Walt Secord explained how being a Canadian First Nations man raised on an Indian reserve, his recent conversion to Judaism, and being deputy chair of the NSW Parliamentary Friends of Israel, motivated him to become “an unabashed supporter” of Shalom Gamarada.

“I was the first member of my family to complete high school,” Secord said.

“My father’s business partner [at the Indian reserve] was Mr Silver – an Orthodox Jewish Holocaust survivor – who became my mentor, and much of my good fortune I owe to that generous man.

“He taught me that [access to] education is a great leveller in an unfair society … this [Shalom Gamarada] program is a testament to what can be achieved.”

UNSW vice-chancellor Professor Atilla Brungs described the university’s partnership with Shalom Gamarada as being “so powerful and vital, because the transformative effect of education begins as a ripple, and continues as an endless wave that lifts everybody up”.

Shalom Gamarada co-founder Ilona Lee, delivering her last address as chair of its board of trustees, announced her successor as Dr Lisa Sarzin.

And first-year medical student Miranda Wallace – one of four program ambassadors sharing their stories on the night – sang the national anthem in the Awabakal language, and recalled how her “dream to study at UNSW was hanging in the balance because of a factor beyond my control – [lack of] financial equity”.

“Shalom Gamarada took me under their wing … their support made me realise you’re only one decision away from a totally different life.”

Wallace aims to specialise in obstetrics, and “work in remote communities to assist Indigenous women to give birth on country”.

“Undertaking this degree is something I never thought was possible,” she said.