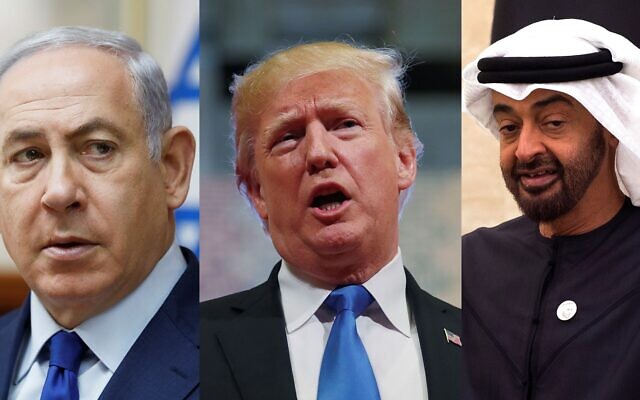 A DUBAI-based rabbi has told The AJN the announcement of the normalisation in relations between the United Arab Emirates (UAE) and Israel is “historic” but “not surprising to me at all”.

Israel and the UAE shocked the world last week when they agreed to set up full diplomatic relations between the two countries, the third such deal the Jewish state has struck with an Arab country after Egypt and Jordan.

Delegations from the two nations will meet in the coming weeks to sign bilateral agreements regarding investment, tourism, direct flights, security and the establishment of reciprocal embassies.

In an unprecedented interview this week with the Abu Dhabi-based Sky News Arabia, Netanyahu expressed confidence that other Arab states would follow suit and also sign deals with Israel.

Regarding his plan to annex parts of the West Bank, he said that the Trump administration had asked him to suspend it temporarily, and that the top priority at present was expanding the circle of peace.

In a statement to The AJN, Rabbi Levi Duchman, who serves as rabbi to the 1500-strong Jewish community in the UAE, said the peace treaty was “a historic one for all people in the Middle East and for humanity at large”.

“In my years serving as rabbi in the United Arab Emirates, I have witnessed firsthand the power of respectful and peaceful collaboration: Jewish life has blossomed here like a desert rose,” Rabbi Duchman said.

“Due to the immense support the UAE leadership has for our growing community, we have been able to pray together and study Torah together, build synagogues and a Jewish school, and provide access to kosher food for all.

“Given all of this benevolent support, today’s announcement of peace and normalisation of relations is not surprising to me at all.”

He added, “We are grateful to our forward-thinking government, committed as it is to bringing peace, healing and advancement to the world.”

Congratulations to @IsraeliPM and @MohamedBinZayed for their leadership and pragmatism and the @WhiteHouse for its support of this deal. https://t.co/3s85dh5e2R

The sentiment was echoed by Wentworth MP and former Australian ambassador to Israel Dave Sharma, who hailed the deal as “hugely significant for the Middle East” and said the White House “deserves credit” for helping broker the agreement.

“Building ties between the two most economically dynamic parts of the Middle East will provide big commercial and trade opportunities. Direct flights and access between Israel and the UAE will link Israel’s technological prowess with the financial, logistics and investment hub of the region – a win for both sides,” Sharma said.

He added, “The Palestinians should welcome this deal as it in fact makes a two-state solution more likely and helps the Palestinian national cause.”

Meanwhile, Jewish community leaders in Australia were unanimous in their support for the accord.

“This announcement is a landmark moment,” Executive Council of Australian Jewry co-CEO Alex Ryvchin said, “not only in the history of the region but in the fulfilment of Israel’s founding vision of living in ‘peace and good neighbourliness … with neighbouring states and their peoples’ as enshrined in Israel’s Declaration of Independence.

“It also deals a major blow to the old strategy of anti-normalisation and permanent war with Israel which has only entrenched enmity and caused misery and bloodshed.”

Zionist Federation of Australia president Jeremy Leibler said, “This is a bold sweeping brushstroke in the mural of our history, and it points to a future with more hope and peace.

“We hope that this important declaration will be followed by similar treaties between Israel and other nations in the region.”

Australia/Israel & Jewish Affairs Council national chairman Mark Leibler noted, “Full relations between Israel and the United Arab Emirates represents a historic breakthrough, signifying a change to the anomalous and unproductive paradigm that, for more than 70 years, saw Israel and its Arab regional neighbours only as enemies.

“As Israel’s Prime Minister Benjamin Netanyahu said when announcing the breakthrough, it represents a wider change in the region, where today, many states have come to see Israel not as an enemy, but as ‘a strategic ally for stability, for security, for advancement and also for peace’.”

NIF Australia executive director Liam Getreu commented, “While we also welcome news that the Netanyahu government is retreating from plans to carry out a de jure annexation of the West Bank, his statement in announcing the deal – that he still remains committed to carrying out the plan – is cause for concern.”