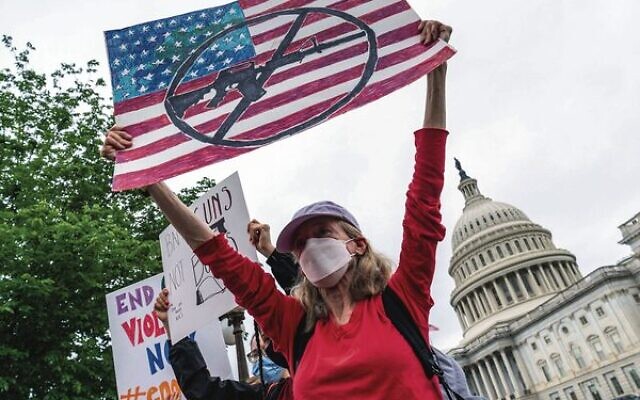 Activists join Senate Democrats outside the Capitol in Washington, DC to demand action on gun control after a gunman killed 19 children and two teachers at a Texas elementary school. Photo: AP/J. Scott Applewhite

The phone call lasted an hour, 56 minutes. We’d managed to hang up within two hours, always our goal, with just too much to talk about. This time, apart from our usual updates, there was the school massacre at Robb Elementary School in Texas, as well as our election results.

My friend and I have been chatting like this for over 50 years since, as an exchange student I moved in two doors away in Albany, New York. After my return home a year later: aerogrammes, reel-to-reel tapes, precious but rare operator booked phone calls and visits back and forth kept us connected. Oceans and decades couldn’t keep us apart. Now of course, we’re linked through cyberspace and our unwavering bond.

Nestled in a tranquil corner of New England, so far, Barb has managed to escape any direct attack from lunatics armed with assault rifles. There was a time though, just last year when the Apple store she’d been visiting had to be evacuated – a threat, thankfully abated.

The recent supermarket shooting in Buffalo, New York – just a drive from Albany – took me back six years when I was last in the States. Together, visiting the school we’d attended in the 60s, to my dismay we had to be escorted to the bathroom by armed guards – a sign of an escalating epidemic of gun violence.

On our call this week, as Barb expressed her deep despair at what had become of her country, I thought of the so-called religious right, far from her state borders, who preach of their “God-given rights” to bear arms. What sort of God would condone a right that leads to such depravity as the ruthless slaughter of innocent children and their teachers, going about their business on an ordinary school day, in a grade 4 classroom?

America today is a different one to that which I experienced as a teenager. Living with a Jewish family, rich in Jewish culture and complete with the Russian bobbe and zeyde living upstairs, we regularly attended the local Temple Israel. We were all well aware of the horrifying race riots of the 60s, but could never have imagined that the act of attending a Shabbat service could be your last, as it was for 11 members of the congregation at the Tree of Life synagogue in Pittsburgh, Pennsylvania in 2018 when a crazed gunman opened fire. Likewise, as Barb and I joined the throngs of students filing into Albany High every weekday morning, we could not have foreseen the day that schools would routinely become the indescribably tragic scene of lethal mass shootings, as they are today.

In his article “Tragedy In Texas – Jewish groups divided on gun control” (AJN 03/06) Ron Kampeas talks of the vociferous views on gun reform by Jewish groups across the political spectrum, in the wake of the Texas massacre. He makes the point, “The majority of American Jewish groups, even many who could be characterised as centre or to the right on Israel policy, remain outspoken on the issue.”

On reading of the response, from groups representing Orthodox through to Reform, my thoughts returned to another experience of my 2016 trip. A highlight which stayed with me was the international premiere of the play American Son at a boutique theatre in Pittsfield, Massachusetts which eloquently examined America’s racial divide through the eyes of an estranged interracial couple. Following the production, as the cast was introduced on stage for a Q&A, hands shot up in the audience. Several typically articulate Americans got to give their views, as did I – Jews fight injustice and want to be heard.

The final speaker, a Shoah survivor, faltered with emotion as she talked of the challenges she and her mixed-race daughter, sitting by her side, had endured. She wondered aloud why the audience was predominantly Jewish.

Late in our call I hesitated before bringing up our recent election results, not wanting Barb to feel worse, or to skite about the contrast to our reality in Australia. It was more to shine a light of hope. I expressed the elation I share with many other Australians in the strong sense that the people have spoken. We’ve said, enough is enough, witnessing a sweeping change through the Independent and Green vote that has restyled the Australian political landscape. It’s taken community belief, leadership and action to make it happen, and happen it has.

Would such a change be conceivable in America? Perhaps our election result can indeed illuminate the magnitude of what can be achieved when the will is strong enough. Barb and I need to keep talking. No doubt, that discussion will be an ongoing one.

Janine Joseph is a Melbourne writer.