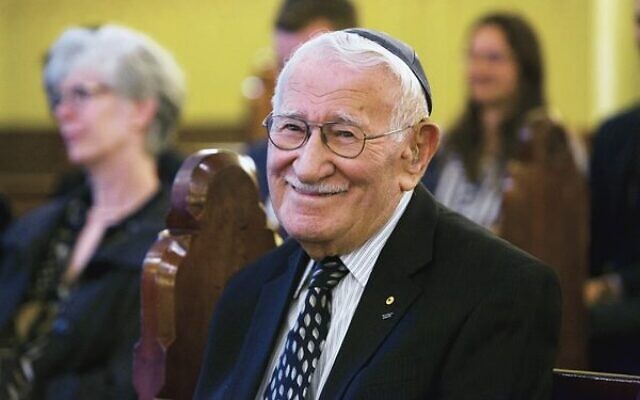 “EDDIE Jaku, a man who did so much good in the world through talking, is now silent, and others must talk for him and about him.”

That was the message from The Great Synagogue’s Rabbi Dr Benjamin Elton at Jaku’s funeral last Thursday, following his passing at the age of 101. The service at Rookwood Cemetery, which was limited due to COVID restrictions, was live streamed to around 600 people.

Thousands more will be able to pay their respects to Jaku at a state memorial service, NSW Premier Dominic Perrottet announced on Tuesday.

Stating, “Today the whole world stands bereaved,” Rabbi Elton paid tribute to “an extraordinary” man who “dedicated himself to telling the story of the Holocaust as he experienced it, tirelessly and with total dedication”.

“As one of the last adult survivors, he gave immense and incredible service to Holocaust memory, and his efforts only seemed to increase in age. I think the effects of Eddie’s life and work will be felt for decades to come,” Rabbi Elton said.

“Whatever he said and wrote was full of wisdom, principle, morality, happiness and above all a refusal to hate, feel jealousy or envy but rather to embrace friendship and love.”

He revealed that despite ill health and the ongoing pandemic, Jaku enjoyed life until the last minute.

“Monday was a wonderful day for Eddie. He went out, enjoyed lunch, coffee, cake. His last full day was a very happy one for him.”

Noting messages and condolences have come in from around the world, Rabbi Elton said, “Eddie meant so much to so many. He was an amazing source of support to his children, grandchildren and great-grandchildren in their difficult times. He was always available to speak at an event whenever he was asked, who always radiated with his famous smile.”

He concluded, “Eddie: you were our friend, and we will be your friend. We will continue your mission to defeat darkness by bringing light, to destroy hatred by bringing love.

“We were privileged to know you, to listen to you, to learn from you. Your memory will always be a blessing, and we will make sure that your teachings are never forgotten.”

“Eddie Jaku has shared kindness and understanding throughout the world, and his message of hope will stand as a beacon of light into the future,” Farlow said.

“May his memory be a blessing and may his message remain a light to the world.”