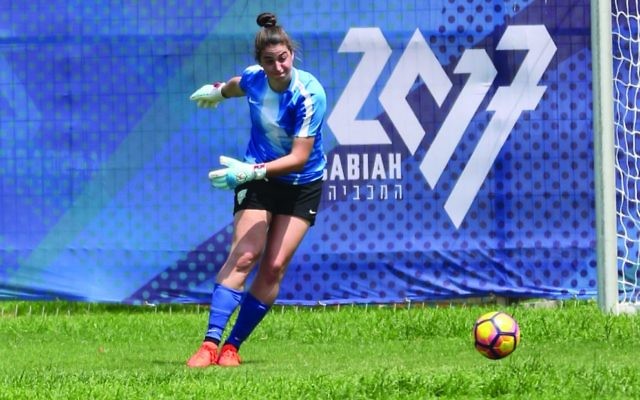 ON a cold June afternoon in Melbourne, Genia Avram and Timmy Purcell, the captain and coach of Maccabi Australia’s women’s football team, met with W-League goalkeeper Melissa Maizels from Perth.

The meeting was a last ditch effort to find a goalkeeper after, only days earlier, Amy Seskin suffered a severe shoulder injury and was forced out of the Games.

Avram and Purcell weren’t sure that Maizels was Jewish, but after studying lists of names of Australian goalkeepers, they arranged the meeting on a hope and a prayer.

Then they asked the all-important question.

“If I was to answer right now I would be lying, I have no idea,” Maizels replied.

She left the table, called her grandfather and asked for a brief lesson about her family tree.

“I then proceeded to get 15 minutes of him comparing Judaism to Christianity and a lesson on Jewish history,” she said.

“I had to cut him off, I said: Grandfather, I need to know to what extent I am Jewish,” and with that she received the exciting news, “Oh, yeah, you’re Jewish.”

At that moment she learned that both her grandmother and grandfather are Jewish.

In fact, she learned that her great, great, great-grandfather was the Chief Rabbi of Lodz.

“I’m 24 and I didn’t know any of this. It was certainly an interesting conversation.”

After finding out the exciting news, Maizels delivered the verdict to her new coach and captain.

“Timmy and Genia just erupt, there were high-fives exchanged at this café and it really was a great moment.”

Maizels is an outstanding goal keeper and an asset to the Australian team. The 24-year-old played at Melbourne Victory from 2012-2014, then went on to wear the gloves for Canberra United until 2016 before she joined Perth Glory for the 2016/17 season.

Maizels had six appearances in Perth Glory’s successful campaign in 2016/17.

This week Maizels joined the more than 500 Australian athletes who started competing at Maccabiah in Israel.