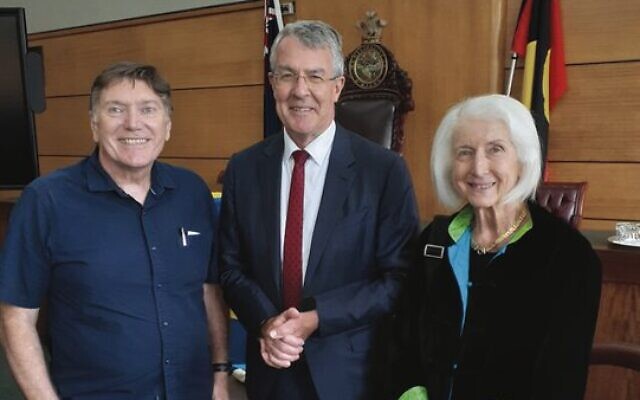 The event, spearheaded by the Raoul Wallenberg Unit of B’nai B’rith Victoria and co-hosted by the City of Port Phillip, was the first of what is to become an annual day of recognition in Australia for the Swedish diplomat.

Wallenberg saved tens of thousands of Jews in Nazi-occupied Hungary from certain death by issuing them with a Swedish government protective travel document of his own invention: a ‘Schutzpass’.

In Budapest he established nurseries, hospitals and a soup kitchen, and designated more than 30 “safe” houses, creating an “international ghetto” that kept Jews holding certificates of protection from neutral countries safe.

Dreyfus also noted the story of Erwin Forrester, a Holocaust survivor who was saved by Wallenberg during the war. He said Forrester’s survival was an “example of the profound consequence of Wallenberg’s actions”.

Forrester passed away in October last year, and his granddaughter, who spoke at his memorial service last month, said, “Raoul Wallenberg’s determination to help as many Jewish families as possible to escape the horror of the Holocaust is the reason we are here today. Although the impact of Poppa’s bravery is hard to measure or comprehend, I know my family would not be here today if Wallenberg hadn’t intervened.”

In 2013 Wallenberg was recognised as Australia’s first honorary citizen at the recommendation of then-prime minister Julia Gillard.

“Some of the individuals whose lives he redeemed became part of our first, great transforming wave of postwar immigration; among the first to pledge themselves to their new home after Australian nationality was formalised in 1949,” Gillard said at the time.

“The story of Raoul Wallenberg shows that even in the face of evil, one person can make a difference for all of humanity.”