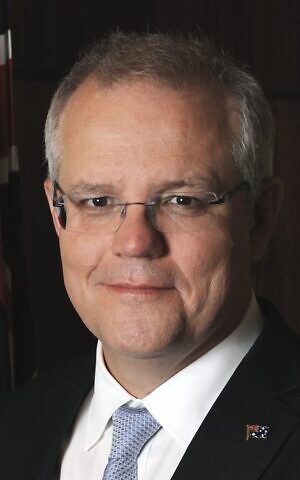 I feel a great affinity with Jewish Australians. Growing up in Waverley, in Sydney’s east, my father often said to me, “If you want to understand community, understand the Jewish community.”

In recent years, it’s a lesson that has come alive as I’ve read the teachings of the late Rabbi Lord Jonathan Sacks. It’s also been expressed by my many Jewish friends. This year, Josh Frydenberg and his family invited me to share their seder meal. It was a wonderful moment of faith, friendship and community – and I am grateful to Josh and Amie for sharing that evening with me.

Rabbi Sacks beautifully wrote that the purpose of Judaism is to honour the image of God in other people. That is what I have found through the Jewish Australians who have become friends.

There should be no doubt that our government recognises the special place of Jewish Australians in our national life and the place of Israel in the life of the world.

With Israel, Australia shares an affinity. As I said in Parliament, “Ours is a 70-year long friendship between two peoples which share a commitment to democracy and the rule of law; have a multicultural character, are committed to science and research, to a free press, to prosperity for our people and to innovation to overcome the challenges of our often hostile natural environments.” I will never resile from that.

These beliefs have guided what we have done as a government.

Australia is the most successful multicultural and multi-faith nation on Earth. From the floor of the United Nations to local communities, we will always fiercely oppose antisemitism.

Last year, we embraced the definition of antisemitism adopted by the International Holocaust Remembrance Alliance.

Future generations of Australian children must know about the Holocaust, hear the testimony of survivors, and understand the dangers of hate speech and extremism.

We stand totally against the BDS campaign. As I said on Holocaust Remembrance Day, “The virus of antisemitism still lives in our world. We know its symptoms. The de-platforming, the cancelling and silencing of Jewish people. The boycotting of Jewish businesses and Jewish artists – hidden under the guise of geo-political lobbying. The threats to Jewish leaders, the attacks on Jewish places of worship. The blaming of Jewish people for every ill in the world.”

My government has invested heavily in actions to keep Jewish people in Australia safe. In the recent budget, we provided an additional $50 million to the Safer Communities Fund, bringing the total investment to $315 million. The fund supports safety upgrades for schools, places of worship and community meeting places.

I believe the right to hold and to practise faith must be respected and protected, not just in our homes and workplaces, but in our schools and in our communities. The freedom to practise religious beliefs without discrimination is fundamental to who we are as Australians.

It is why we are committed to introducing into Parliament in the next term, a Religious Discrimination Bill that will enshrine religious freedom into law.

A Coalition government will always believe in the right of the State of Israel to live free from threats, intimidation and violence. We are strongly committed to a two-state solution where Israel and a future Palestinian state exist side-by-side in peace and security within internationally recognised borders.

This election is a choice between a government you know and a Labor Party you don’t.

It’s also a choice between government members you know, like Josh Frydenberg, Dave Sharma and Tim Wilson who wholeheartedly support your community, and “independent” candidates who have already shown their support for your community is tepid at best.

At this election, I ask for your support so that we can continue to offer the principled leadership you rely on – building a strong economy and a stronger future.