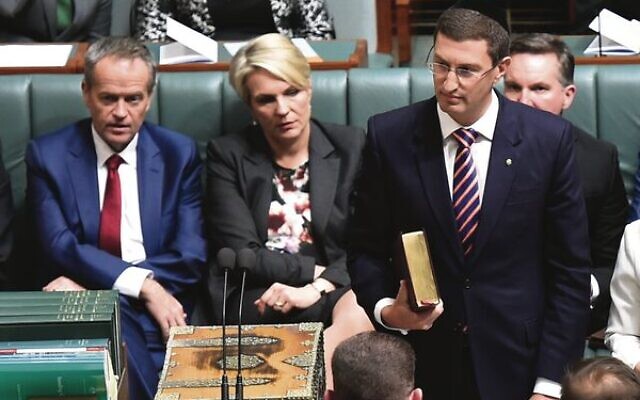 Julian Leeser (right) at his swearing in to Parliament in 2016.

“It is very hard to think of a prime minister who has been closer to our [Jewish] community or stood up more for the interests of our community than Scott Morrison,” Berowra MP Julian Leeser told The AJN ahead of the federal election.

“There is a real choice this election between a prime minister who, his whole life, has been for our community – because he grew up with our community – and has been a most steadfast supporter of the State of Israel, and Anthony Albanese, who has a much more mixed record on these matters,” the Jewish parliamentarian said.

A Sky News report and an article in The Australian this week outlined a number of past statements by Albanese critical of Israel, though as Labor leader he has embraced a moderate tone and has long opposed boycotts of Israel.

Leeser, who was elected to the House of Representatives in 2016, said voters he has spoken to are “very concerned” about the economy and national security.

“I’ve spent several years on the Joint Committee on Intelligence and Security and I was very pleased we recommended the banning of Hezbollah and Hamas in their entirety and that the government took that up, and I’ve continued to work on national security issues as well as Indigenous Affairs and migration – the committees that I’ve chaired – and I’ll continue to pursue those issues,” he said.

In his electorate, he said “I’ve got almost every imaginable faith group under the sun”.

“I’m very much in favour of the Religious Discrimination Bill that Scott Morrison put forward in the last parliament, and I know my faith communities are very, very supportive of that,” he said. “I always take heart from [the late Rabbi the Lord] Jonathan Sacks’ words, that we should be true to ourselves, to our faith and a blessing to others, regardless of their faith.”

“I think people want to stick with a government that they know has taken a strong position in the national security sense, and is also well-able to steer us through the economic headwinds that the world is facing.”