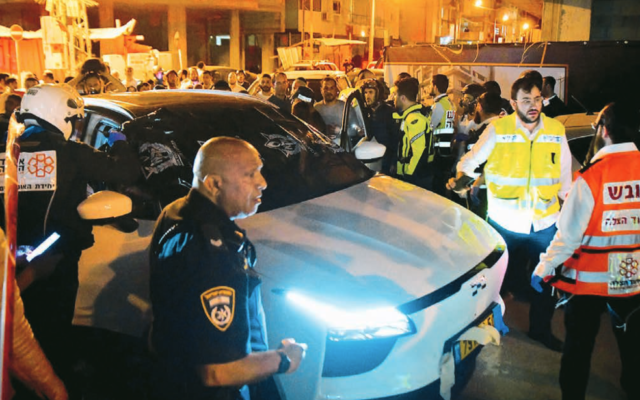 Five people were killed when a Palestinian terrorist opened fire on passersby in Bnei Brak on Tuesday night, marking the third deadly terror attack in Israel in just over a week.

It comes after two police officers were killed in a shooting attack in Hadera, in Israel’s north, on Sunday and a terrorist attack in Beersheba five days earlier in which four people were killed.

“We are currently dealing with a new wave of terrorism,” Israeli Prime Minister Naftali Bennett said on Tuesday night.

“Citizens of Israel, I ask, together with you, to share in the immense pain of the families and wish the wounded a quick recovery. We are all responsible for each other.

“We face a challenging period. We have experience in dealing with terrorism, from the very beginning of Zionism. They did not break us then and they will not break us now.”

“Australia strongly condemns these and all terrorist attacks,” she said.

“Our thoughts are with family and friends of the victims of the attacks in Beersheba, Hadera and Bnei Brak, and we particularly acknowledge the officers who gave their lives to protect civilians.

“Israel, like all other nations, has the right to self-defence, and the right to implement reasonable and justifiable security measures.”

“We call on those responsible to ensure these senseless and cruel acts of violence cease,” she said.

“Our thoughts are with the people of Israel and we send our deepest condolences to the loved ones of those killed.”

Member for Wentworth Dave Sharma, a former ambassador to Israel, said “there can be no justification” for the attacks.

“I condemn unreservedly recent terrorist attacks in Israel which have claimed innocent lives in Beersheba, Bnei Brak and Hadera,” he said.

“I am appalled by these attacks, which are morally repugnant and opposed to peace. My thoughts are with the bereaved family and friends.”

“There appears to be good reason to fear that the bloody rejectionism of Israel’s basic right to exist which has led to so much bloodshed for so long is about to lead to another extended round of violence and mayhem targeting innocent civilians,” he said.

Saying, “Our hearts go out to the victims, their loved ones, and to the whole of Israel,” Executive Council of Australian Jewry co-CEO Peter Wertheim noted this week’s summit in Israel attended by four Arab foreign ministers which “once again demonstrated the utter failure of the Palestinian strategy to stigmatise and isolate Israel”.

“The terror attacks are an expression of the impotence of the Israel-haters to implement this strategy. They are reduced to lashing out indiscriminately at innocent people,” he said.

“While Palestinians hand out sweets in Gaza to celebrate the murder of Jews, Israel continues to go from strength to strength.”

Zionist Federation of Australia president Jeremy Leibler said, “We stand with you, in mourning, in frustration, in anger, in resoluteness.

“We don’t yet know if these attacks are coordinated. But what we do know is that decades of Palestinian incitement against Jews and Israel sows the seeds of this violence.

“We know that decades of monetary rewards, societal rewards and promised rewards in the afterlife fertilise the hatred. And we know the rejectionist attitude of the Palestinian leadership complements and nourishes it.

“This cocktail of hatred makes peace all but impossible and makes terrorism all but inevitable. It needs to stop, for the sake of both Palestinians and Israelis and their shared future.”