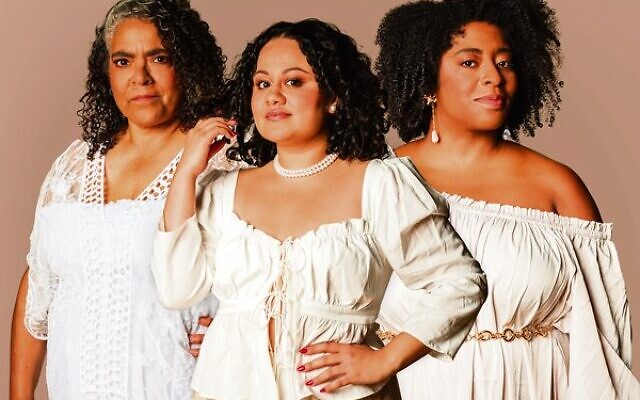 Three years ago, Amanda LaBonté heard a story on a podcast. It was only three minutes long, but that was enough to capture LaBonté’s attention.

“I went on the full journey of [Emilia Bassano’s] life, and I found myself firstly laughing and smiling, and this incredible fire igniting in me, and then I was crying. It was a really powerful piece,” she told The AJN in between rehearsals for the new production.

She immediately wanted to tell this woman’s story, calling her business partner Sophie Lampel to say that she had found the story they were looking for, before pitching to playwright Morgan Lloyd Malcolm, for the Australian rights to Bassano’s story. But, as many other stories go, they shook hands to stage the show, and then the next day COVID hit, and everything was put on hold.

Recently though, someone nudged the producer asking if Emilia was still on the table. The answer was a resounding yes.

As the story goes, it’s 1609 and Emilia Bassano is a writer, wife, lover, mother and muse. At a time when women were not at the forefront of history, Bassano fought for her right to be heard.

Some believe Bassano was Shakespeare’s Dark Lady and others believe she was actually behind a lot of Shakespeare’s writing, upholding the theory that William Shakespeare of Stratford was a pseudonym for another writer. She was also the daughter of immigrant Italian and Moroccan Jews, and one of the first published female poets.

But why has her story been erased from history? And how is it still so relevant today?

“What appeals to me most about it is that there’s just this woman who against all odds never took no for an answer and remained true to herself in a time when there were roadblocks constantly.

“And yet she continued to fight,” LaBonté said, describing the play as a “beautiful mash up” of classic and contemporary, and comedy and drama.

The role of Bassano is played by three women, each portraying the poet at different stages of her life.

“They do this gorgeous dance of storytelling,” LaBonté explained. “They seem to share the story and the same language, and you move through the story through the eyes of the younger Emilia first, but at the same time you do get that presence of all three of them all the time … The older Emilia is there not only as a narrator, but as a voice of reason or confidence that everything is going to be okay. It really unites that sisterhood feeling.”

The backbone of the play is that Bassano’s story still resonates today, as LaBonté points out.

Emilia, which has won three Olivier Awards, shows that women still need to stand up to fight. It’s something that LaBonté certainly wants audiences to feel.

“I’d love them obviously to have a great night and be caught up in the entertainment and the rollicking nature of the piece. But by the end, it’s very hard not to feel like your fire is being ignited, that there is some sort of call to action,” she said.

“You know it would be wonderful if a handful of audience members every night, just for a moment on their drive home, considered their behaviour or what they could do or how they could continue to fight the fight. We all have our own internal battles of equality … even a small thing that could be changed would be an amazing feat for us.”