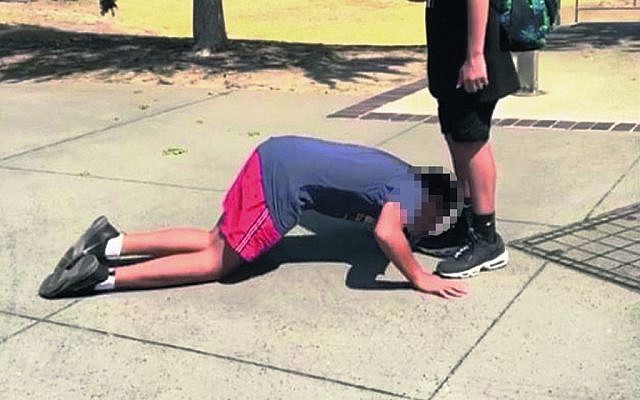 The 12-year-old Jewish student was forced to kiss the feet of a Muslim child.

A FIVE-YEAR-OLD student began wetting himself in class after he was subjected to antisemitic bullying over the course of four months, while a 12-year-old student was forced to kiss the feet of a Muslim child and was physically assaulted.

Both Jewish students, who have asked to remain anonymous, had to leave their public schools because their families felt the principals did not provide them adequate support.

The first child, a prep student at Hawthorn West Primary School, started wetting himself in bed at night, and in class. He also became agitated, began using derogatory language and looked for an excuse each morning to avoid going to school. His parents knew something was wrong, but were unsure if it was all a part of the adjustment process from kindergarten.

Then, after spilling his cereal one morning, the five-year-old broke down. “He literally fell down on the floor,” his mother shared with The AJN, “and said, ‘Mummy, you shouldn’t love me. I’m a worthless, Jewish rodent. I’m vermin.'”

Mortified, his mother crumbled on the floor with him.

It was later revealed that the young boy was being bullied on a daily basis by five classmates in the school bathrooms. It started when he was questioned about being circumcised. Then came the barrage of antisemitic insults, including “Jewish vermin”, “the dirty Jew” and a “Jewish cockroach”.

But when raised with the school, the mother says they were “dismissive” of the antisemitic element. The school’s solution was to keep the student from using the regular bathroom, offering the facilities of another bathroom instead.

“But we felt uncomfortable because obviously you’re not addressing the issue,” remarked the student’s mother.

The parents called for an education policy about antisemitism to be rolled out. But the school declined.

According to the student’s mother, “they refused to accept there was an antisemitic issue. ‘It’s not antisemitism, it’s just bullying.’ The principal said, I don’t want to make other students feel uncomfortable”.

Within 24 hours, the newly implemented solution was breached – and another incident took place in the bathroom.

The family doctor had told the parents that their son was suffering from “an acute state of anxiety”. He did not return to the school and is now being home-schooled as the parents assess their options.

“Essentially, everyone’s solution to this problem is to send your child to a Jewish day school. I don’t know. Do we live in a society where we really have to do that in order to be safe?” asked the student’s mother.

“I have no issue with children being bullies. They’re learning. But you need to address it. And you have to say … this is antisemitic behaviour. It is not okay. Name it. Educate on it. But you can’t just say it is bullying. You can’t just hide it. You’ve got to be honest with children, and you’ve got to educate.”

The mother of the 12-year-old in the second case told The AJN that her son was lured to a park by a classmate from Cheltenham Secondary College, with a promise of a kick of the footy.

But when the student arrived, he was given the ultimatum: Bow down and kiss the feet of a Muslim child, or face the threat of violence by the nine other 12 and 13-year-olds. Vastly outnumbered, the student complied. The incident was photographed, filmed and posted on Instagram.

In the ensuing months, the student was also subjected to antisemitic slurs including “Jewish ape”, “Jewish n****r” and “Jewish gimp”. He was followed home from school daily, and physically assaulted in the school corridor with the bully attacker shouting he is “a cooked up Jewish c***”.

“He had been punched in the face. The whole left side of his back was bruised. He had a gouge of skin out of his shoulder,” the student’s mother told The AJN on the condition of anonymity.

As a result, the student required a visit to hospital, and suffered from acute anxiety.

But the school refused to acknowledge the events as antisemitic, explains the student’s mother.

Following the park incident, she reported it to the school, “They said, it didn’t happen on school grounds. There is nothing we can do about it. Just go to the police if you think it is a matter for the police, and you know, we can’t really do much about banter.

“They didn’t even want to call it antisemitism. To avoid action, everything becomes an ‘isolated incident’, so then it is not bullying or religious vilification,” she said.

When contacted several times by The AJN, the principals of both schools chose not to comment. Instead a spokesperson for the Victorian Department of Education and Training told The AJN on behalf of both schools, “antisemitism and racist bullying are not tolerated in Victorian schools”.

“All students have the right to feel safe and supported by their school. We take the wellbeing and safety of students very seriously, and are committed to ensuring schools are inclusive and safe learning environments for all students,” he said.

“We put in place supports for all students who are affected in incidents of aggression and violence in schools.”

Both cases were reported to the Anti-Defamation Commission (ADC). “Not surprisingly, there is mounting evidence that families are forced to take their children out of public schools and to enrol them in Jewish day schools due to a growing sense of insecurity and fear that their kids will be harmed simply because of who they are,” commented ADC chairman, Dvir Abramovich. He added that these incidents are “a rapidly spreading and monumental crisis”.

“Too often, parents are concerned that the antisemitic abuse will escalate if they notify the school since their child will become an even bigger target,” he said.

“Some remain silent, believing that the school leadership will not be sympathetic to their complaints. In fact, some administrators don’t recognise these incidents as hate-motivated acts, and trivialise them as childish aberrations, as ‘kids being kids’, are very slow to respond, or do not impose the appropriate punishment.

“Good intentions and words are not enough. We now need bold and solid action.”

To read the full story in this week’s AJN, click here.