What were the challenges and logistical difficulties in getting this project off the ground and setting it up in Ukraine?

I think one of the challenges pre-deployment was to choose the right place. Is it going to be in Poland on the border, or deep into Ukraine land [but] far enough from the battle zone area? At the end of the day I need to bring back all my troopers in one piece to Israel. So the first few days we sent the rapid assessment team here before the delegation, just to find the right place, the appropriate place and the place that most of the population will enjoy the benefits.

Also one of the main challenges, we decided that the core or the vast majority of the delegates will be from Sheba Medical Centre, but we’ll also welcome other hospitals in Israel to join. Yes, everyone is coming from the health sector, but some people have other protocols regarding medical situations, not everyone in Israel is using the same computerised system. So creating the language among the people who are treating the patients was very important.

Upon arrival, I don’t think that there was big challenges for us because all the logistics were already here. 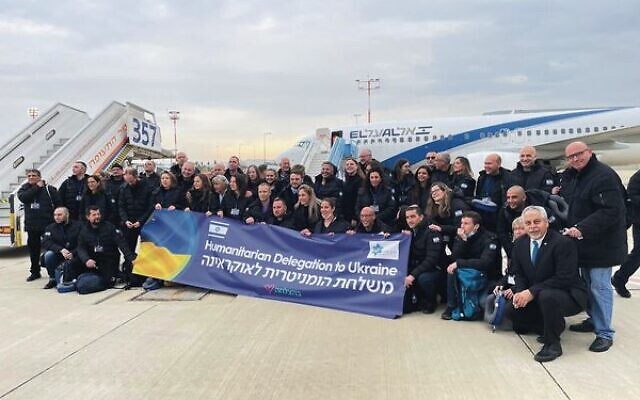 We chose the place, that was with the support of the mayor of the city, he allowed us to use the school – right now there are no schools in Ukraine so it’s empty. And we found a big yard that allowed us to put up our tents, and part of the departments. Due to the difficult weather conditions we moved into the building, mainly the hospitalisation departments. The staff are staying in the two upper floors. We have excellent support from a logistics company that organise us kosher meals from Lviv, and they organise all showers and toilets.

Of course the language barrier is always a difficulty.

And in addition in the last few days, we started to suffer from COVID within our staff. Right now we have 26 people positive to COVID. Those who are symptomatic, we asked not to come to work and those who are positive but non-symptomatic, they need to wear a mask and put on the eye shield and then they can work.

How did you decide which medical services you would offer?

This is the first time that Israel is sending a totally civilian delegation. We couldn’t take from the army due to the situation of course, so therefore, we built the capacity only from the civilian part of the healthcare providers in Israel. So we looked at our experience in the last delegations, such as Kosovo and India, we have some background and in addition, we sent the rapid assessment team.

Two days after the request from the Ukrainians already the rapid assessment team was here. They set up their base in Poland and every day they came in and went out. They were my sensor on the ground to have a better understanding of what is needed.

We came to show solidarity with suffering people, with human beings and other health workers. We cannot stand the blood, seeing other people around the world suffering, I think it’s in the DNA of the Jewish people…

We know that men between 20 to 60 are deployed to the army, so therefore we plan that we’ll see more females, a lot of kids. And in addition, we understand that due to the situation, the medical healthcare here in western Ukraine is suffering from the lack of physicians that were drafted to the army. And most of the hospitals were prepared to get some wounded from the frontlines, therefore they closed all their ambulatory services. So we were prepared for chronic diseases to ambulatory services and in combination with the knowledge that we had from previous delegations, we combined and chose the right physicians and the right medications to bring with us from Israel. 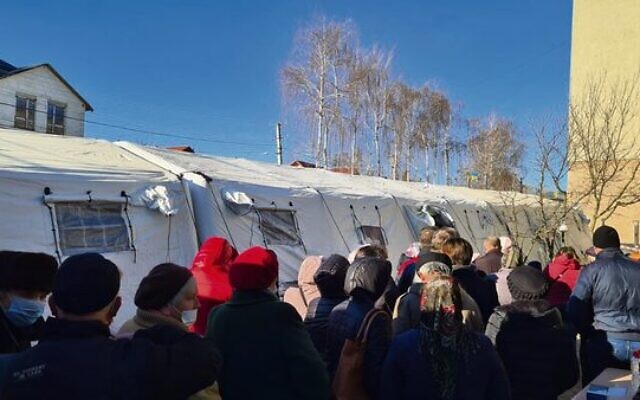 Ukrainians waiting to be seen at the hospital.

The hospital was named for Golda Meir. Is it a way to continue her legacy of helping others around the world?

Actually, there are two reasons why it is called Kochav Meir, Shining Star, after Golda Meir. First, Golda Meir was born in Kyiv. So she is Ukrainian. The other reason that the Minister of Foreign Affairs chose Golda Meir as the symbol is that Gold Meir was the funding mother of Mashav.

Mashav is the agency in the foreign affairs services that is doing such delegation missions and education around the world. And because Mashav right now is running this, they are in charge of it, I think it’s also a good reason why we call it Kochav Meir, Shining Star.

What kind of cases have you seen coming into the hospital?

We saw until this morning 1400 patients since last Tuesday, a big range of cases. The most common cases here for the adult population is severe hypertension. We see a lot of chronic disease – especially heart disease, congestive heart failure, COPD, all kinds of heart problems that have deteriorated in the last few weeks, but also – I will say very sensitively – being neglected for many, many years due to very superficial and poor services in this area of Ukraine. 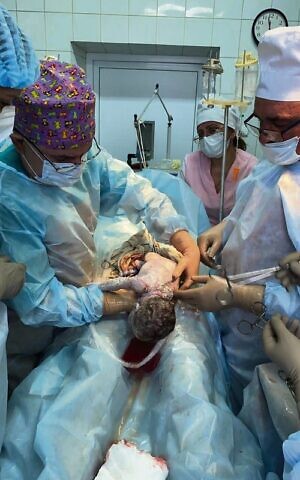 You need to understand it’s rural country, it’s not in the big cities. I’m sure that in the big cities that you can find better medical infrastructure. The infrastructure here in normal times is very, very superficial and poor. Add to that the war zone and that most of the medical staff were deployed to the army. Then you get a combination of a vast majority of the population with very poor accessibility to medical care.

We are running in half an hour to have our first caesarean section here. So everyone is very thrilled and preparing themselves for the operation. So yeah, it’s a very, very interesting mission here.

Wonderful. If it’s a girl, they should call her Golda.

Okay, I will suggest! Or Zlatta. The local name for gold is Zlatta.

And how has the response been from the Ukrainian patients?

All of them, they cannot have enough words to express their gratitude for us, to the State of Israel. You need to understand this population is very, very polite. They were trained and raised in Soviet manners. There are queues from six in the morning, people are waiting in the line. No one is pushing and no one is yelling. They say thank you after you examine them or give them medication or treat them. We get strong support from the mayor of the city of Mostyska, he’s coming every morning, every afternoon to visit us to see if something is missing or if we need something else. So they’re overwhelmed and they don’t have enough words to express the gratitude. 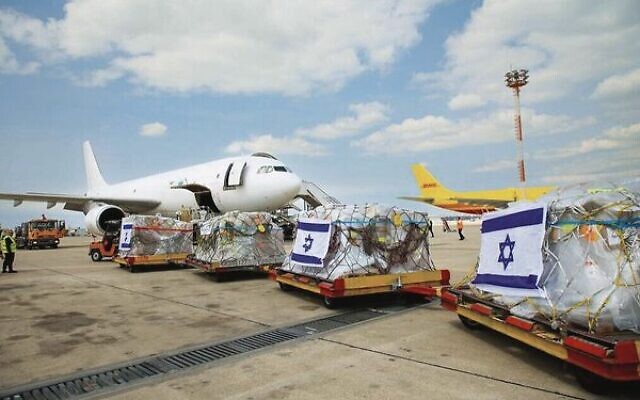 Equipment for the hospital being loaded onto a plane at Ben Gurion Airport.
Photo: Sivan Shahar/Anaba/GPO

What are they saying about what’s happening in Ukraine?

And, of course, they’re very, very sad. Those of them who are talking, they are praying to God. This is a very religious area. Actually, the church is just next to us and each one of them are wearing a cross, so they pray to God that the war will end very soon and peace will come to their country.

Is the war having any effect on the operation of the hospital?

We are too far away even from Lviv. But from time to time, we have sirens in this area, which we need to stop everything and run to a shelter in the school. Here they can operate the siren in all the oblast, all the region, which actually is bigger than the State of Israel. 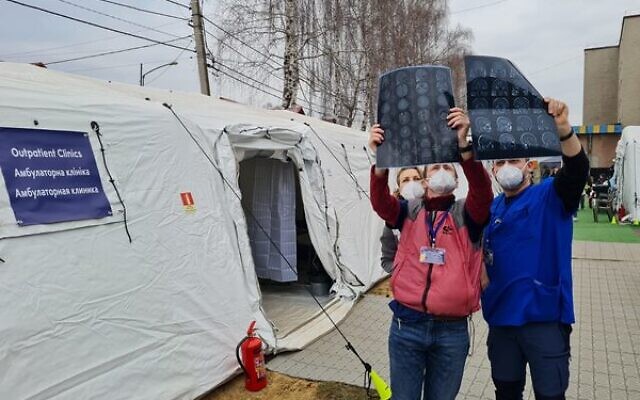 You need to understand this situation here. Although the Russians and the Ukrainians know exactly, they got the coordinates of the location of our hospital. I know that the Prime Minister and Israeli Foreign Affairs service talk to his equivalent and I won’t say we get the blessing of the Russians, but the Russians know and accept that we are here on a humanitarian mission. Therefore, I think this area is very, very safe. We have some local police patrolling around us, we have our Israeli security system. We have cameras outside. We have evacuation cars that are parking here from day one. We have bulletproof helmets and vests. So I feel safe and my team feel safe although there are some sirens from time to time.

No doubt you are hearing the news of what’s happening back home in Israel with this wave of terror. Is it hard to be so far away?

Yes, absolutely. It’s very hard to be far away from home knowing that your own homeland is suffering right now. But I think Israel is strong enough to cope with this situation and in parallel, to send troopers to support others. Not many other nations would do the same. We look around us and from the border with Poland until Lviv there is totally nothing. So we are the only true field hospital in this area.

Anything else that you think is important?

I just want to echo that I got and I think most of the management here in this delegation got hundreds of calls, WhatsApps, emails from all over the world – mostly from Jewish communities – asking what they can do for us. And I want to thank all those communities around the world, especially in Australia through our organisation, the friends of Sheba in Australia. To send my gratitude and my thanks to all those who are supporting us.

Thank you so much for your time. It’s been a pleasure and a privilege to talk to you and all the very best with the work you’re doing.

Thank you. Thank you very much.