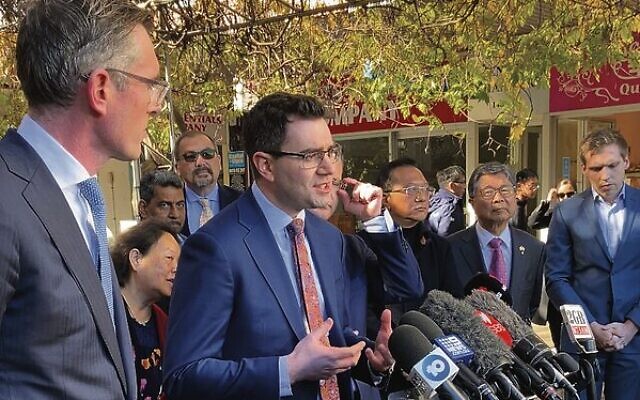 It is part of a $28 million multi-year investment in the NSW budget to boost multicultural events and increase engagement with multicultural and multi-faith communities.

“One of the key takeaways from the pandemic is the critical role of multicultural and faith communities in ensuring we are all connected, engaged and supported,” Perrottet said.

Speaking to reporters on Friday, Perrottet said there was “nothing more important” than the freedom to practise faith safely.

“This advisory council, the first issue they’ll be looking at is security around religious institutions and ensuring that people right across our state are free to practise their faith … and that they feel safe and secure in doing that,” he said.

Minister for Multiculturalism Mark Coure said the advisory council “will ensure that our religious and faith-based institutions will have a voice around the table”.

NSW Jewish Board of Deputies CEO Darren Bark expressed thanks to the government.

“Everybody should feel safe to be able to practise their religion,” he said.

“An attack on one faith is an attack on all of us. And it’s really important that we all take action as a collective, to ensure that everybody feels safe.”

“One of our state’s most decorated and respected leaders, Mr Kaldas holds outstanding credentials and is an excellent choice to further build community cohesion and harmony in NSW,” he said.

Alongside Kaldas, faith community representatives will provide an independent and consultative voice on issues of concern to the government.

In a joint statement on Friday the JBD, Christian SRE, Australian National Imams Council, Hindu Council of Australia and Buddhist Council of NSW said it would give faith groups “a united voice”.

“When communities work together, we can achieve great outcomes,” they said.

“Recently, we have seen faith leaders working together, side by side, on a number of different initiatives. This will only be enhanced and increased with the introduction of this council.”

Kaldas, who has also been appointed the new chair of the Multicultural NSW Advisory Board, said community cohesion and harmony “has never been more important”.

“In this leadership role I see myself helping to contribute to social cohesion right across NSW,” he said.