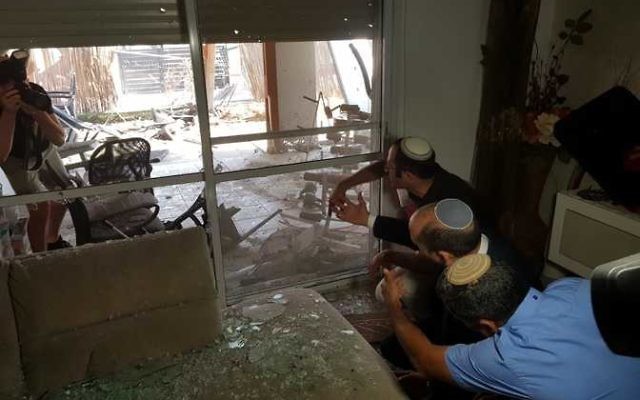 Sderot residents survey the damage to a house caused by a rocket from Gaza. Photo: Sderot Municipality

THE Executive Council of Australian Jewry (ECAJ) has lodged an official complaint with the ABC over its coverage of events in Israel and Gaza last weekend.

Israel had earlier targeted a Hamas terror tunnel and bases after a hand grenade was thrown from the border at an Israeli soldier on Friday and after enduring weeks of incendiary kites and balloons flown from Gaza which have so far scorched 3000 hectares.

But much of the world’s media yet again led their coverage of Saturday’s events with Israel’s response, with the preceding rocket barrage and flaming kites mentioned as a footnote, if at all.

“People feel that the world doesn’t care about us, that it doesn’t care that people are trying to kill Israelis,” Dov Drachdman, a Sderot resident, told The AJN.

In Australia, the ABC led its Weekend Breakfast report on Sunday with, “The Israeli military has launched a wave of airstrikes against dozens of militant targets in the Gaza Strip,” mentioning only one rocket that landed in Sderot, saying, “Three Israelis are believed to have been injured.”

ECAJ co-CEOs Peter Wertheim and Alex Ryvchin said the coverage failed to note critical facts that were “highly relevant” to understanding how the violence began.

“The report omitted to mention that on June 13 and 14, Hamas and Islamic Jihad launched more than 170 rockets and mortars at civilian population centres within Israel, hitting a home, a children’s playground and a synagogue,” they said.

“The ABC report’s mention of ‘a rocket’ which was ‘believed’ to have injured three Israelis … gave the viewer no information at all about the magnitude of the Palestinian rocket and mortar barrage into Israel, or the fact that that barrage had preceded the Israeli airstrikes, or the fact that the announced purpose of the airstrikes was to suppress further Palestinian rocket and mortar attacks against civilians in Israel.

“By leaving out critical facts, this ABC news report: entirely omitted context; obscured cause and effect; and misled its audience about which side had initiated the outbreak of violence.”

“We hope that the latter two reports are indicative that future ABC reporting on Israel will endeavour to be professional and fair, as it has sometimes failed to be in the recent past.”

Zionist Federation of Australia president Danny Lamm said the media “has a lot to answer for”.
“Even if you brush over the headlines of our local papers, one thing is clear – the story only becomes a story when Israel fires back,” he said.

“There is something incredibly wrong with the way the media reports on the situation when 200 rockets is treated as a side note, and Israel’s response to the terror becomes the big story.”

Australian Jewish Association president David Adler said “the ABC bias and distortion are now so extreme it could be regarded as a facilitator of terrorism by deflecting scrutiny from those targeting civilians with rockets”.

Conservative commentator Andrew Bolt said, “You’d assume from [the ABC] report that Israel just decided out of the blue to bomb peaceful Palestinians.”