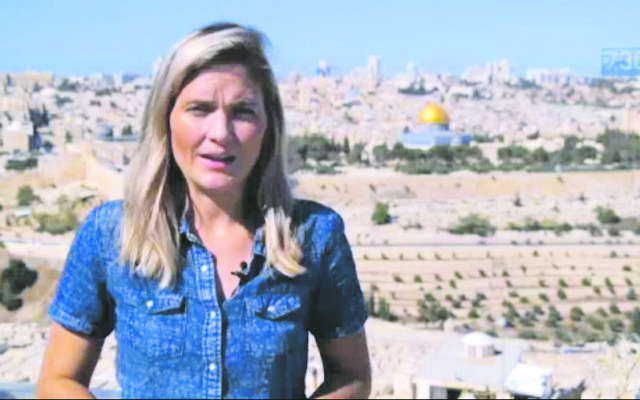 ABC’S controversial Israel correspondent Sophie McNeill is set to move back to Australia to join Four Corners next year.

McNeil has been the focus of several complaints from Jewish communal leaders, and politicians, since she became the ABC’s Middle East correspondent in 2015.

Three months ago Federal MP Michael Danby launched a scathing attack on her in a series of adverts in The AJN that claimed her coverage was “unbalanced”.

Drawing a contrast with McNeill’s coverage of the eviction of a Palestinian family, one ad noted that when terrorists murdered the Salomon family earlier this year, the network did not name them and didn’t show pictures of the family, unlike other international networks such as the BBC and CNN.

Danby, who referred to McNeill as “ABC’s notorious Jerusalem correspondent” this week, said he is thankful that she is leaving Israel.

“I just want to restate that the ABC flat-out lied when they said that she mentioned the Salomon Family in her broadcast, which caused so much fuss at the time,” Danby told The AJN.

“She de-humanised the Israeli side by not picturing them, mentioning their name and just referred to them as settlers in the occupied territories.

“This is a pattern of dehumanisation, which I’m very pleased should end when her times in Israel ends.”

The claims were denied by The ABC who stood by their reporter.

Zionist Federation of Australia president Danny Lamm told The AJN that McNeill’s coverage of Israel hasn’t been a fair presentation of the news.

“She has coloured the news presentations with her personal opinions,” Lamm said.

“I hope her successor will do better job at presenting the news, rather than presenting commentary.

“I wish her all the best in her new position.”

The recent attack by Danby is the last in a long line of complaints against McNeill from leaders in the community.

Last year, the ABC corrected two errors when a complaint was filed by the Australia/Israel & Jewish Affairs Council (AIJAC) in relation to McNeill’s report about sick people from Gaza who require medical treatment.

In 2015, McNeill’s coverage of the ongoing conflict between Israelis and Palestinians became the source of a heated exchange between Liberal Senator Eric Abetz and former ABC boss Mark Scott at a Senate estimates committee hearing.

Abetz asked what research had been done into McNeill’s attitudes to matters in the Middle East prior to her appointment, noting that she had previously expressed her admiration for journalists John Pilger and Robert Fisk, well known for their anti-Israeli views, “and whether it is appropriate to allow somebody in that position to allow their emotions to get into their reporting”.

Her replacement has not been announced.