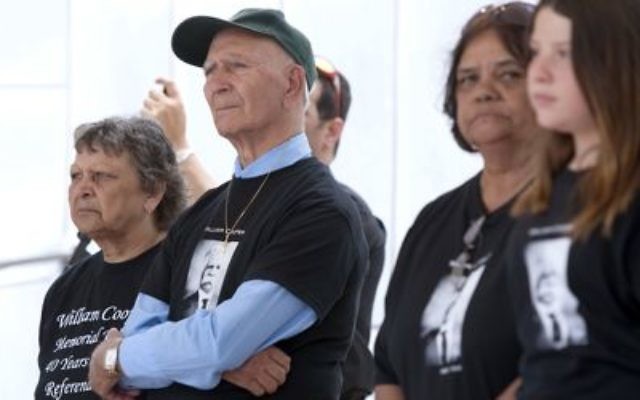 KEVIN Russell, the great-grandson of Aboriginal activist William Cooper, has called for official government recognition of his famous ancestor, a call echoed by the Jewish community.

On Sunday, Russell led a walk from Cooper’s former house in the Melbourne suburb of Footscray to Federation Square. The walk commemorated a similar journey Cooper took in 1938, when he marched to the German Consulate to present a petition condemning the Nazis’ treatment of Jews during Kristallnacht.

Among those taking part in the commemoration were Cooper’s 90-year-old nephew, Alf “Uncle Boydie” Turner, and representatives from the Jewish community, who expressed their gratitude for Cooper’s actions.

While grateful for Jewish recognition of his great-grandfather’s protest, Russell called on the Federal Government to do more. He has been supported in his quest by the Executive Council of Australian Jewry (ECAJ), which passed a resolution honouring Cooper at its recent annual general meeting.

“He is one of many who should be recognised,” Russell said. “[He supported] any marginalised or oppressed groups. He was campaigning for Maoris, black Americans, Jews. Whenever he saw anything wrong, he stood up because he knew what it was like to be oppressed.”

Cooper, the secretary of the Australian Aborigines’ League, also petitioned King George V to include Aboriginal Australians in the Constitution.
“He is a global warrior, but he hasn’t been acknowledged in his own country,” Russell said.

ECAJ delegates unanimously approved a motion last month recalling Cooper’s petition “with gratitude and respect”.
It marks that “this was the only known private protest anywhere in the world against the Nazi regime following Kristallnacht” and notes that it took place at a time when “Aboriginal people themselves were denied citizenship and other basic human rights”.

The next stop for Russell and other family members is Israel, where they will be honoured next week at a dinner at Yad Vashem, hosted by the Australia-Israel Leadership Forum.

The family has previously travelled to Israel, where the Jewish National Fund planted trees in recognition of Cooper’s protest. The activist, who died in 1941, has also been honoured by the Israeli embassy in Canberra.