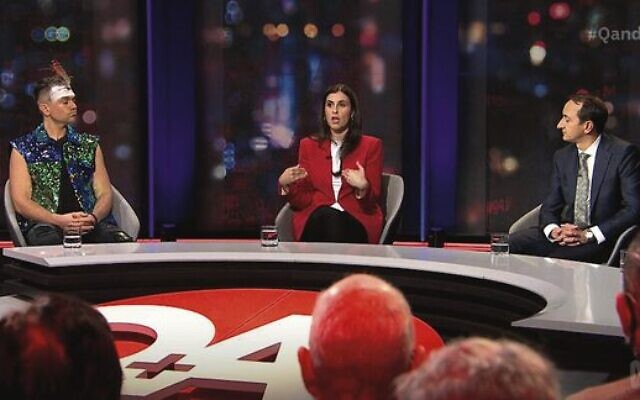 THE Executive Council of Australian Jewry (ECAJ) said this week that an Australian Communications and Media Authority (ACMA) ruling that an episode of the ABC’s Q&A from May 2021 was unbiased is “beyond belief”.

The “Trauma and Truth-Telling” episode, which aired shortly after the 11-day war between Israel and Hamas, featured a panel that heavily favoured the Palestinian narrative and no representative from the Jewish community, with Wentworth MP Dave Sharma left to defend Israel.

ECAJ, the Zionist Federation of Australia (ZFA) and the Australia/Israel & Jewish Affairs Council (AIJAC) all lodged complaints following the broadcast.

But in its just released report, ACMA found no breaches of standards related to impartiality, featuring a diversity of viewpoints or unduly favouring any perspectives.

ECAJ co-CEO Peter Wertheim said, “The Q&A program in question featured four panellists with a critical view of Israel against one defender of Israel, gave four times as much airtime to anti-Israel views than to a moderate good faith analysis, and censored all pro-Israel tweeted comments.

“It is beyond belief that such a program could be found not to have unduly favoured one view over another.

“This outcome only confirms the futility of appealing to the ACMA about the ABC’s demonstrable bias against Israel, and emphasises the need for an external, specialist and genuinely independent body to be created to assess complaints.”

AIJAC executive director Colin Rubenstein, who has long been calling for an independent external complaints procedure, said ACMA “is not fit for the purpose”.

“ACMA absurdly accepted the ABC’s contention that Dave Sharma represented an ‘Israeli perspective’ on the conflict, despite his presence on the program being to put the government’s position on a range of issues, not as an advocate for Israel,” he said.

“This determination simply proves that the current system is not satisfactory, and that no-one can have confidence that the ABC will be held to the standards of balance and fairness that the taxpayers who fund it have every right to expect.”

ZFA president Jeremy Leibler noted that in its submission to ACMA, the ZFA had argued that the ABC breached its obligations of fair and honest dealings by presenting one panellist, Jennifer Robinson, as a “human rights lawyer”.

“While we’re disappointed that the ACMA accepted the ABC’s arguments that tokenistic airings of a pro-Israel perspective amounts to ‘balance’, what is particularly concerning is that the ACMA chose not to investigate whether the ABC concealing Jennifer Robinson’s professional engagement in the Palestinian cause breached the ABC’s commitment to fair and honest dealings,” he said.