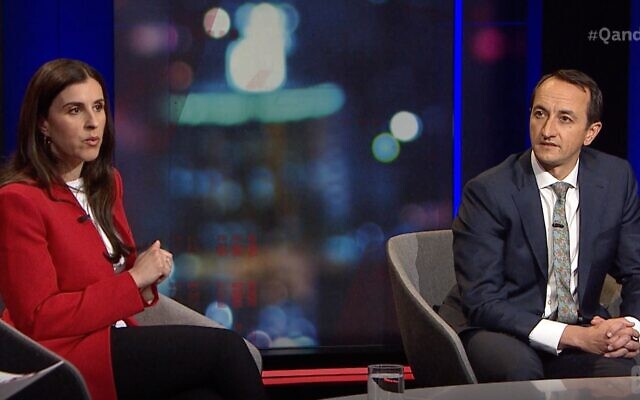 THE Zionist Federation of Australia (ZFA) and Australia/Israel & Jewish Affairs Council (AIJAC) have welcomed a decision by the Australian Communications and Media Authority (ACMA) to investigate the ABC’s Q&A episode of May 27 – Trauma and Truth-Telling – that focused on the recent Israel–Hamas conflict.

In June, both organisations submitted complaints to the national broadcaster, arguing the program breached the ABC’s editorial policy and code of conduct.

While former Australian ambassador to Israel Dave Sharma was on the panel, he appeared alongside two well-known critics of Israel, pro-Palestinian activist Randa Abdel-Fattah and human rights lawyer, Jennifer Robinson. “It did not include anyone who is an Israel advocate or who speaks for the Australian Jewish community,” noted the ZFA.

Shortly after, complaints to the ABC Audience and Consumer Affairs unit were dismissed, with the broadcaster insisting, “We are satisfied that a range of principal relevant perspectives were presented on the issue, and that no one view was unduly favoured over any other.”

The ZFA called the ABC’s response “inadequate”, and requested that ACMA – Australia’s central media regulation body – “have the ABC properly respond to each of the points raised”.

“The Q&A episode was so woefully one-sided, and the ABC’s response to our complaint was so woefully dismissive that a complaint to the ACMA was the only option available to us,” said ZFA president Jeremy Leibler, a sentiment shared by AIJAC.

“All the evidence suggests that Q&A went out of its way to ensure the Palestinian narrative was deliberately prioritised,” said AIJAC executive director Colin Rubenstein, who called the ABC’s response at the time “laughable”.

Israel voices as audience members, rather than on the panel, “was a clear-cut breach of the ABC Code of Practice’s requirement that programs not favour one perspective over another on contentious issues”.

“Yet the ABC, acting as its own judge and jury, insists it was all fine,” added Rubenstein, who also noted, “ACMA cannot make findings binding on the ABC even if it upholds the complaints, further highlighting the need for a genuinely independent, external complaints body with actual powers to hold the ABC to account.”

“That way, issues can be dealt with properly the first time and the ABC can become accountable to its owners, which are the Australian taxpayers.”

ECAJ co-CEO Peter Wertheim commented that ACMA “lacks the time, resources and expertise to do the job effectively”.

He said the body “does not have any specialist expertise that would give it the insight to make a finding about the prevailing news and current affairs culture within the ABC in relation to Israel, or to identify antisemitism more generally”.

“At present, it has not even adopted the IHRA Working Definition of Antisemitism to guide it in assessing appeals concerning complaints of antisemitism,” he added.