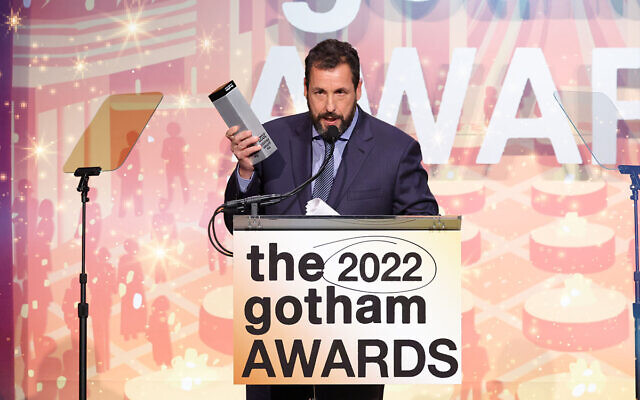 Adam Sandler is a great dad, a total mensch, an AARP Magazine cover man (whelp!) — and he is turning out to be one of the best award speech makers of our time.

After wow-ing us with his truly hilarious speech at the Independent Spirit Awards back in 2020, Sandler upped the ante this week when he won a Lifetime Achievement Award at the Gotham Awards and let his daughters —  Sadie, 16, and Sunny, 14 — write his acceptance speech. At least, that’s what he would have you believe, but listening to this speech, I can’t help but think he may have had more influence than he’s letting on.

Jewish Uncut Gems directors Josh and Benny Safdie, who will soon be working with Sandler on a new Netflix movie, introduced the award. Josh recalled how in 1993, they first watched him on TV late at night, and how he reminded them of all these (very Jewishly named!) people that they knew, including Rick Shapiro their Little League coach and who also did comedy in the side. “They all kind of looked like you and made jokes like you,” the Safdies said.

Benny said that Sandler was a “man who could go toe to toe with Daniel Day Lewis and Jerry Lewis,” compared him to Frank Capra, and said that Sandler was “the industrial revolution of actors” (Josh called that statement “incoherent” — “everyone in this room is now dumber for having to listen to that”).

Josh added that he knows “you don’t do it for these awards… I know that if you didn’t you would die, I know that about you… you’re one of the hardest-working people I’ve even met.” Then the two introduced a short clip of highlights and beckoned Sandler to the stage.

Sandler went onstage, with a nicely-pressed suit and his adorable bearded punim, and relayed to the crowd that “like many of you tonight, I’ve been too busy to write a speech.”

However, he said that when he revealed this fact to his daughters, they called him rude and mean, and then asked, “Can we write your speech, daddy?” ‚ an offer that he gracefully accepted because he said he would be happy to see them doing something “other than watching YouTube or go to fucking Lululemon every fucking weekend.” (Yes, of course this speech was full of expletives, and I have to say I 100% believe both Sandler and his daughters pepper their speech with R-rated words!) They asked him to do the speech in his usual Southern accent, which is, let’s face it, not really very successful but very, very funny.

Sandler then proceeded to make the most excellent speech maybe ever made.

“Dear well-dressed dignitaries, highly educated hipsters and various other plus-ones of the Gotham Awards, thank you for Lifetime all-time primetime GOAT achievement tribute award,” he began. The speech went on to say that the award means a lot to their dad because his awards shelf is filled with awards “shaped like popcorn buckets, blimps or fake mini-Oscars that say ‘father of the year,’ which he sadly purchased himself while wandering in a sad self-pitying fog through the head shops of Times Square.”

Sunny and Sadie then apologised for Sandler’s “disturbingly unkempt” facial hair, and added that they wished they could be there, but Sandler didn’t “want to spend a night that is supposed to be about me and my greatness listening to you two newly pubertised buffoons screaming ‘where is Timothée Chalamet and how can we legally squeeze that fine little Jewish ass of his?’”

I mean, would you blame them?!?

However, the two were busy at home doing all their dad doesn’t let them do, including, “dare we say, laugh out loud at Ben Stiller movies,” which they say causes Sandler to bellow out “only the Sandman makes people laugh” in the shower, AKA his “screaming room.”

They also mentioned his more “artsy fartsy” movies, Punch Drunk Love, The Meyerowitz Stories, Masterpiece Hustle and, of course, Uncut Gems, which the two said he did only to be at the Gotham Awards and stare at fancy people.

They ended the speech with a thank you to their mother, Jackie Sandler: “Thank you, Mummy, for putting up with Daddy and his crazy fucking moodswings all these years. Now that truly is a feat deserving of a lifetime award.”

It’s probably the best speech I’ve ever heard, and someone needs to create an award show for award speeches just so that Sandler can win all of them. Seriously, you need to watch this entire, hilarious, wonderful speech below.

And while we don’t exactly buy that this speech was written solely by Sadie and Sunny, we do know they’re pretty influential in their dad’s career. Not only are they starring in his upcoming movie You’re So Not Invited to My Bat Mitzvah — they’re also responsible for having him star in Uncut Gems. The two apparently read the script and told him “Dad, you gotta fucking do this movie.”