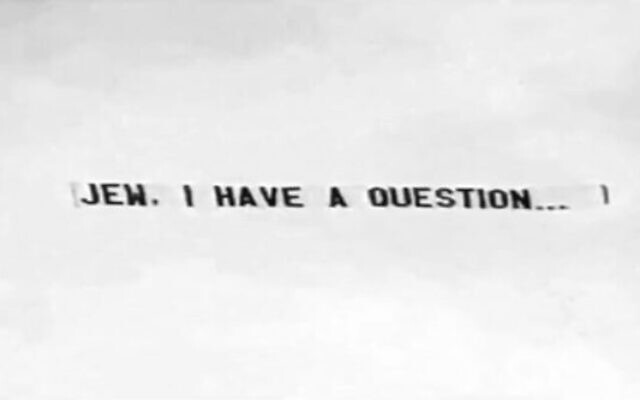 A BANNER proclaiming “Jew, I have a question”, dragged by a plane across the Florida sky last month, certainly raised a few eyebrows.

It was a moment made for Twitter, attracting both jokesters and antisemitism watchdogs.

A tweet by the group StopAntisemitism got more than 100 shares. Another group, United With Israel, shared a photo of the banner and tweeted, “Antisemitism is alive and well.”

Others poked fun, tweeting, “Judging by my experience of Judaism the question is either something deep, philosophical and existential or ‘When are we eating? I’m STARVING.”

As it happens however, the curious banner was actually a marriage proposal to a woman nicknamed “Jew” – whether it is short for Julie, Julia, Jewel or Judith, we can’t say.

According to local reporter Glenna Milberg the banner was created and flown by a company called Aerial Banners.

She reported that a company representative didn’t realise the banner could be read as offensive until he got a call from the local branch of the Anti-Defamation League.

“And then after sitting back, thinking about it, reading a few things and having things explained to us, it was like, ‘Oh my God’,” he told Florida’s News10.

But the real question is did “Jew” say yes? According to Milberg, she did.