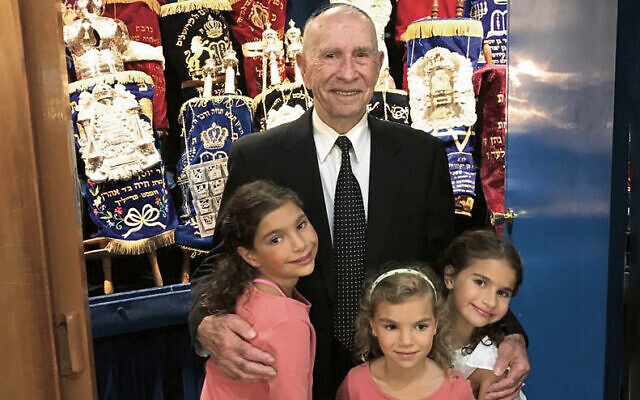 Zvi Sharp with his great-grandchildren (from left) Zahara, Ariella and Mayah Sharp.

FOR Zvi Sharp, having a bar mitzvah was an important milestone – so vital that the 93-year-old Melbourne great-grandfather decided to take this Jewish rite of passage at an advanced age.

Just before the world became gripped by COVID-19 isolation measures, the retired textile worker received his special bar mitzvah aliyah at Caulfield Shule from Rabbi Ralph Genende; a coming of age delayed almost a lifetime by the Shoah.

Born in Ryki in eastern Poland, Zvi lost both his parents and several siblings in the Holocaust and spent time in the Ryki Ghetto and at the Deblin, Buchenwald, Colditz and Theresienstadt concentration camps.

Liberated from Theresienstadt by Russian soldiers, he later left Europe on a trek that would eventually take him to pre-state Israel in 1946, but only after a long internment in Cyprus. Yet Zvi’s odyssey did not end until 1961 when he was reunited with an uncle living in Australia, settling down and becoming involved in the garment industry.

Zvi’s turmoil was chronicled in his biography, The End to the Beginning of My Life, which grandson Joshua Sharp helped him compile. In the book, Zvi reflected, “The Germans wiped out my entire immediate family … I have nightmares all the time that the Germans will come back and catch me.”

In 2005, Zvi made the courageous step of revisiting Poland, and particularly his town of Ryki, and it was a harrowing homecoming. “Everything began to hit me quickly and I became distressed … We did not stay long but it was enough for me to break down for the first time on the trip.”

Joshua told The AJN his grandfather “always put off having a bar mitzvah, although he kept thinking about wanting to do it. And then he finally did it. He was really happy about how it turned out, and my grandmother was so excited”.

After the service, the family held a festive kiddush at the home of Joshua’s father Ian.

Contacted by The AJN, the reflective great-grandfather described his bar mitzvah, in which he was called to the Torah for an aliyah, as an emotional experience, but having his wife Miriam and his sons Ian and Henry and their families in shule with him was the highlight of the day.

“In the Holocaust, I was by myself and I wasn’t free,” he said. “But now when I see my two sons and their families and my grandchildren and great-grandchildren around me, I know that’s what I survived for.”