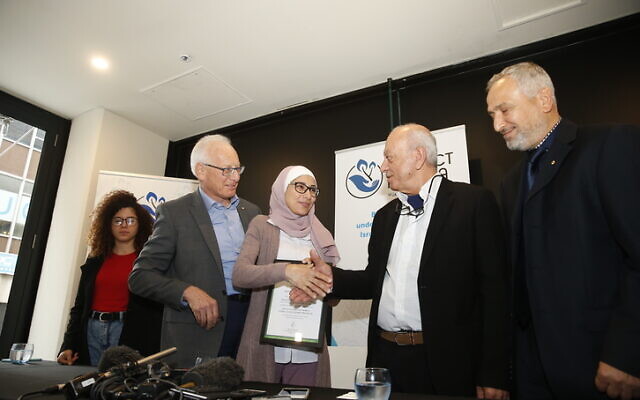 Saeed Maasarwe has expressed a hope and a wish that “people in Israel – all the people – the Jewish and the Arabic people, come [together] to be humanity”, in comments made to The AJN on Sunday.

Together with his eldest daughter Noor, Saeed is visiting Australia from Baqa al-Gharbiyye near Netanya, to attend the sentencing of his daughter Aiia’s killer, and for the launch of Project Rozana’s Aiia Maasarwe Memorial Medical Fellowship, Program. The initiative was established in honour of 21-year-old Aiia, who was raped and murdered in Melbourne in January.

The fellowship will provide financial support to Palestinian physicians to be trained in Israeli hospitals, enabling them to address the needs of their people.

Yesterday, Project Rozana launched the Aiia Maasarwe Memorial Medical fellowship, in honour of the young Arab-Israeli student who was raped and murdered in Melbourne earlier this year. Read an interview with Aiia’s family and details about the fellowship in The AJN, out on Thursday.

“This makes a bridge between the Jewish [people] and the Palestinians,” Saeed told The AJN, “And from another side, it gives a chance for life. I hope also this can improve the life for the people.

“I believe also, Aiia, she would love this project,” he said.

Noor added, “It was one of her life long goals to connect people and bring them together in a way, and it is just very unfortunate and very sad to see her dream is coming to life when she is not here.

“I think she would be super excited. She would maybe be jumping with joy if she can see what is happening in her name.”

Currently, Salami is one of just four Palestinian paediatric haemato-oncologists in the West Bank – and the only woman. As a result of the fellowship, she will undertake a two-year training program at Hadassah Hospital. Salami will learn how to perform bone marrow transplants, making her the first Palestinian doctor equipped to conduct the procedure across the Territories.

Founder and chair of Project Rozana, Ron Finkel emphasised empowerment as key to a positive future. He shared that while US$30,000 has already been raised for the fellowship, the aim is a minimum of $500,000.

“We’re about hope, we’re about building bridges to understanding between Israelis and Palestinians – and also as Australians,” he said.

It is a message that is encouraged by Saeed, who told The AJN, “People need to think a little bit differently and change to look at the people as if they are human, not to look at his nationality or religion.

“Look at them as the people.”

On Tuesday, Saeed and Noor attended court and saw Aiia’s murderer Cody Hermann jailed for 36 years, to serve a minimum of 30 years without parole.

To contribute to the fellowship, visit rememberingaiia.com.