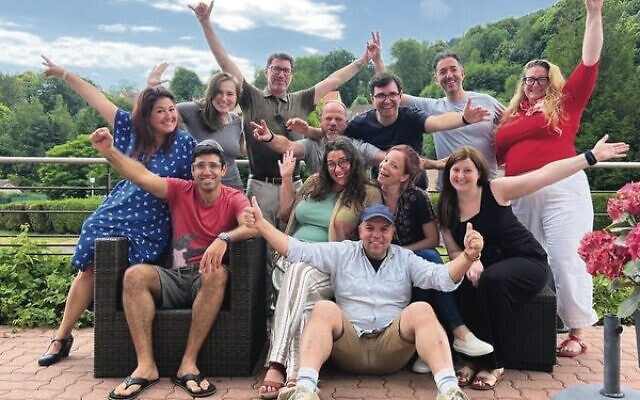 Alex Kats (front) with the other program fellows in France.

Regular recipient of the Nahum Goldmann Fellowship (NGF) Alex Kats, has once again embarked on an international trip with the organisation for the opportunity to discuss questions of Jewish community and continuity.

NGF is named after the man who was principally responsible for negotiating reparations with the German government, and who was also editor of the Encyclopaedia Judaica and president of the World Jewish Congress.

Kats said, “Clearly he was a Jewish pioneer, who also believed in diversity and the prominence of the Diaspora.”

This year Kats joined the NGF alumni program for emerging Jewish leaders from around the world.

Kats was the only Australian accepted into the leadership program and had to commit to attend online sessions in the middle of the night. “I didn’t mind since I am often awake at this time anyway,” he shared.

“Once accepted, I joined 11 other participants from nine countries, and these are some of the loveliest and most committed Jews that I have ever met.”

The alumni leadership program runs for a year with monthly Zoom sessions, and also includes participation again at the NGF seminar which took place in the French countryside just outside Strasbourg this year.

“Even before we met in person, there was a collegial vibe that I have rarely experienced in the past, and now we are even closer and more committed to making a difference in the world,” Kats said about his fellow program participants.

“I had thought that my time with NGF was over more than a decade earlier, so just being there was an unexpected pleasure,” he added.

Kats said some of the highlights of the trip included the “extraordinary kosher food”, as well as “a visit to the seminar by the Chief Rabbi of the Commonwealth, Ephraim Mirvis.”

“He spoke for nearly 90 minutes without any notes about the five lessons that we as a Jewish community should learn from the pandemic,” Kats said.

The online Zoom portion of the fellowship will continue until the end of the year and Kats explains that “after meeting in person in France, the experience will be different since we now really know each other.”

He added that the changes this experience has brought about to his way of thinking and his daily life have not yet come but are rather still “brewing”.

However he said, “I know one thing for sure; that Nahum Goldmann’s vision for a diverse Diaspora is alive and well, and that the fellowship named in his honour has and is continuing to produce committed and passionate Jewish leaders who will stay connected for years,” adding, “I am eternally grateful.”