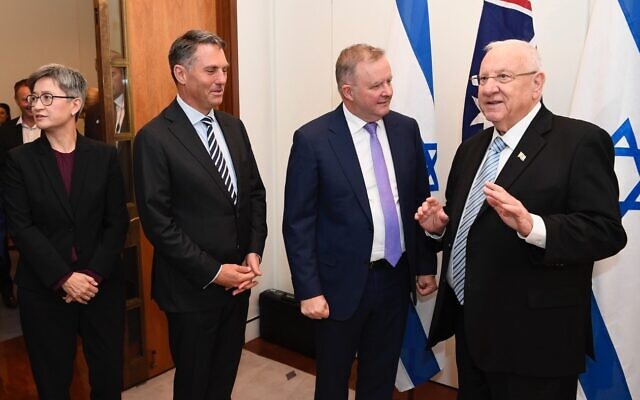 I TAKE the responsibility of being a representative of the Australian Jewish community very seriously and I acknowledge that members of our community are concerned with a resolution passed at Labor’s Conference last week.

To put it into context, this was one of more than 800 policy points, resolutions and amendments we debated and ratified in a policy platform that is 115 pages long.

As is always the case in a robust and diverse political conference, there is much to agree and a bit to disagree on.

But let’s be clear, straight off the bat, about what did and didn’t happen to our policy on the Israeli-Palestinian conflict. Here’s what has changed in our policy – nothing.

Labor will always remain a true friend of the State of Israel. Labor has not altered its support for a two-state solution. And let me be very, very clear about this – Labor has not committed to recognising a Palestinian state.

As Penny Wong made very clear in her speech, the resolution that was passed at this conference is word for word the exact same as the one passed in 2018.

It has no greater or lesser weight than that one. It is in no way binding on a future Labor government – the words of the amendment itself make that clear.

Whether a future Labor government recognises a state of Palestine is a matter for the cabinet to decide on and will not be as a result of the resolutions from both recent conferences.

It can only be made by the government and a cabinet and it will be made with full consideration of relevant factors.

The resolution calls on a future government to recognise a Palestinian state, but it does not commit us to recognising one before the facts on the ground support it.

No one can possibly doubt Michael Danby’s sincerity and his passion for the cause of Israel. But with all due respect to my predecessor, some of the comments he made last week contradict what he said after exactly the same motion was passed in 2018.

He told The AJN (20/12/18) after that conference that it meant a Shorten Labor Government “has the flexibility to act independently on Middle East policy”.

Michael was right then – and what he said remains correct today. Labor’s policy has not changed and that flexibility to act independently on Middle East policy remains.

To be very clear – I don’t think we should recognise a state of Palestine, not yet anyway.

And I don’t think that a future Labor government will, not yet anyway.

In saying that, it doesn’t give me any joy to see the hopelessness that confronts many young Palestinian boys and girls.

I remain a believer in the two-state solution despite how distant it seems at this point in time.

The end goal of a two-state solution is to create a state of Palestine – one which recognises the legitimacy of Israel and pledges to live peacefully, side-by-side with the Jewish State. But the only way that can and will come about is through a negotiated outcome between the two parties.

And here’s an honest truth – not everyone in the Australian Labor Party feels the same way about Israel as I do.

I understand that this is a deeply personal topic for our community – just as it is for me.

My grandfather fought in Israel’s 1948 War of Independence. He packed up his life in the UK because he wanted to help realise Herzl’s dream of a modern, Jewish, democratic state on the ancient homeland of our forefathers and foremothers.

Sometimes, my colleagues say things that I don’t agree with. That’s true of every party.

If you’ve been watching the news and reading the papers lately, you’d see plenty of that in the Liberal Party – especially in the context of a vitally important discussion about the treatment of women in the Parliament.

In our party rooms, in our branches and at our conferences, we often have some hearty conversations about issues close to our heart.

There are some people in the Labor Party whose views on Israel are fundamentally opposed to mine. But they are by no means in the majority and I am by no means a lone voice.

So while I recognise people’s concerns about this are real, we should remind ourselves of the facts of this debate.

Labor’s policy has not changed a single bit. We will act in the national interest if we form Government and we proudly continue to support the State of Israel – just as we did when Labor’s Doc Evatt helped to create it.

Josh Burns is the Federal Labor Member for Macnamara.