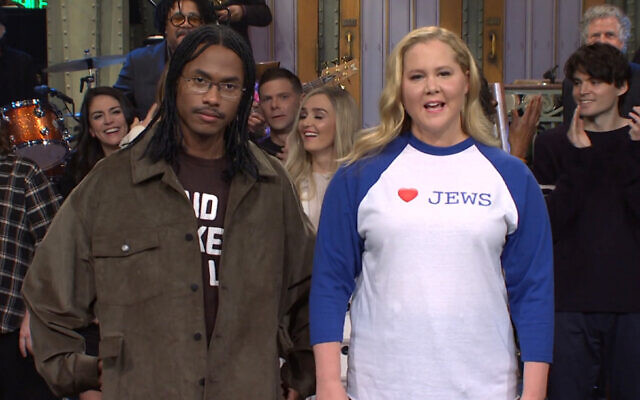 Amy Schumer has often been vocal for support of Jewish people. And when she appeared on SNL recently, she didn’t disappoint.

“My husband is diagnosed, he’s on the autism spectrum. He has autism spectrum disorder. It used to be called Asperger’s,” she set up, before landing the punchline: “But then they found out, this is true, that Dr. Aspberger had Nazi ties… Kanye.” Amy then pretended to be confused, looking at her mic as if to say, “Who said that?!”

It was perhaps the largest laugh of the six-minute stand-up set and necessitated a brief applause break. It was amazing to see a proudly Jewish comic pull no punches towards an antisemite on a huge, televised platform, and then for the audience to react in the way they did.

Schumer, who later revealed that she missed a rehearsal for the comedy sketch show because her three-year-old son was rushed to emergency and admitted for a respiratory virus, also presented a hilarious ode to matzah ball soup and to close the show, the comedian word a ‘love Jews’ tshirt.

Nowhere during the show did Amy Schumer explicitly say that she is a Jewish woman or talk about antisemitism, but at the same time it felt like that’s exactly what she was saying the whole entire broadcast.